The water in Lake Anne was 38 degrees Saturday, but that didn’t stop nearly 200 people from making a “splash” for charity.

The 10th annual Virginia Polar Dip at Lake Anne raised $75,000 for Camp Sunshine, organizers announced at the conclusion of the day’s festivities. A total of 198 people, many dressed in colorful costumes, leapt from the dock to show their support of the cause.

The dry onlookers cheered from the plaza as plungers — some solo, some in groups; some tentatively, some with backflips and cannonballs — took the chilly dive.

Curtis Ellor of Reston had participated in the event every year since its inception, but was forced to miss it last year after an operation. He was excited to get back into the water, continuing the tradition of diving along with his guitar. 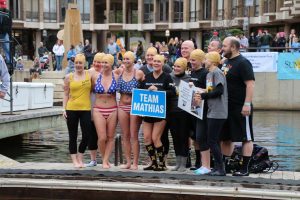 One of those kids was Mathias, who was diagnosed with osteosarcoma when he was 11 and died at the age of 13. Team Mathias, represented by a large group of jumpers from around Loudoun and Fairfax counties, has participated in the event for four years and has raised thousands of dollars for Camp Sunshine.

“Team Mathias’s mission is to support cancer families, siblings and parents — we do care packages for them,” said Emily Kelly of Herndon. “This year we raised almost $5,000 [for the plunge].”

Kelly said the event is a special chance to help kids and families who need a pick-me-up while battling a life-threatening illness. 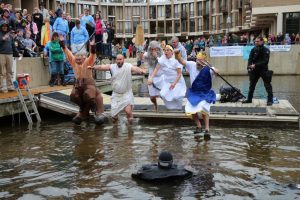 Lake Anne Plaza merchants banded together during the event. Some, including Lake Anne Brew House and Kalypso’s, participated in the plunge itself. They and many others also offered specials throughout the day and donated a portion of the proceeds to the cause.

Organizers said the money raised from this year’s event will support an entire week of services at Camp Sunshine, which is located in Casco, Maine. It is the only year-round program in the nation designed to serve the entire family.