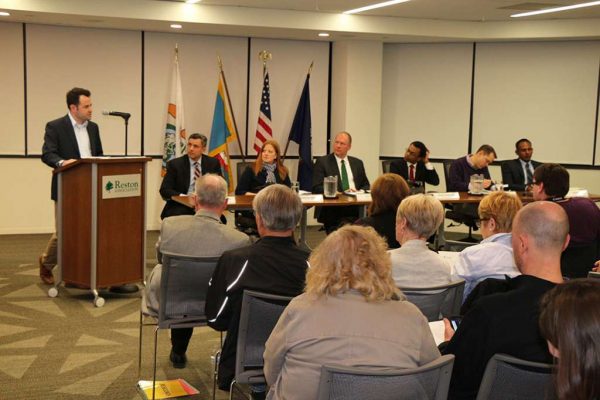 A half-dozen residents have thrown their hats in the ring for an At-Large seat on the Reston Association Board of Directors, and they faced the community Thursday in a candidate forum at RA headquarters.

Roberto Anguizola, Eric Carr, Mike Collins, Charles Dorfeuille, Ven Iyer and HeidiAnne Werner are all vying for the three-year term on the board. The forum provided them an opportunity to tout their abilities, as well as their goals if they should be elected. 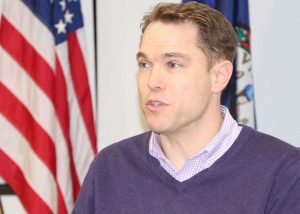 When contemplating the 2018-19 Reston Association budget, which will be approved later this year, candidates said there is a wide number of factors that must be considered. Collins, who was an RA board member from 2010-2013, said it is important for the board to get back to fundamentals.

“We’re not doing the very basic thing we have to do, and that’s maintaining our facilities to the best of our ability,” he said. “That’s going to require laser-like focus by the board, they are going to have to be intimately familiar with our operations, and they have to just say no.”

Dorfeuille, an eight-year resident and a member of the Community Engagement Advisory Committee, advocated for a line-by-line analysis of the budget that separates essential items from non-essential.

“We are spending too much for what I believe we as a community are being given,” he said. “What is non-essential, we look at in the line-by-line review of what we can reduce or what we can de-prioritize.” 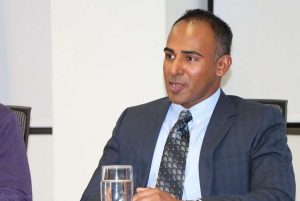 Iyer, also an eight-year Reston resident and the president of a technology business, said the budget must be brought in line without continuing the trend of increasing assessments.

“Our assessments have nearly doubled in the last 15 years — this is not sustainable and it is not warranted,” he said. “In another 30 years, the Reston as we know it now will only be affordable for the wealthy top.”

Carr, a former cluster president with over 20 years of nonprofit and government management experience, said a long-term capital plan is needed so the RA board can “get [its] arms around” the existing capital assets that need to be addressed.

“We think about these 40-, 50-year assets we own in two-year budget cycles,” he said. “That doesn’t make sense and it’s very hard to project into the future, and we continue to get surprised when pools fall into disrepair or when pathways need maintenance.” 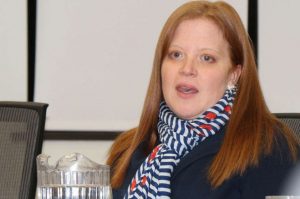 Werner, a lifelong Restonian who works as an association manager, said natural environments need to be protected from development. She added that services, programs and facilities available to Reston Association members need to be optimized.

“This really is to put a focus on our facilities, to make sure they are in the proper maintenance and attractive for members to use,” she said. 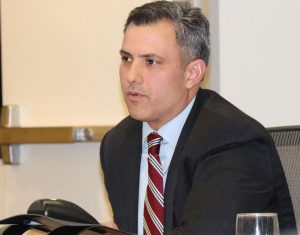 Anguizola, a trial attorney who has lived in Reston since 2008, said his top priority would be to address aging infrastructure in the community. He touted partnerships with nonprofit groups and businesses as a way to achieve that goal without increasing assessments.

“Most of the recreational facilities and amenities in Reston were built in the late ’70s, early ’80s,” he said. “They need attention, and that’s going to cost money to keep them at the level everyone expects them to be at.”

Collins said the board must do a better job of managing its staff and analyzing its needs in the effort to keep costs down.

“The board needs to have firm controls on the budget from the get-go, they need to be willing to get into the details, get behind the top-level numbers and again, say no,” he said. “Sometimes we don’t need a new truck, we don’t need a new computer system. I hate getting into the weeds like that, but apparently we need to do it.”

Beyond the budget, candidates were asked questions on issues including engagement of the community, how conflicts of interest should be addressed and adherence to the Reston Master Plan. The issue of handling continued development and population growth in Reston is also one of great importance, candidates agreed. 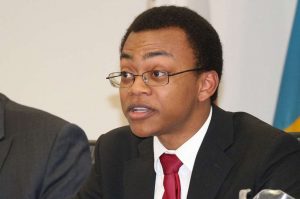 Carr said the future cannot be predicted, only shaped — and he said the Master Plan can be altered, if necessary, to help do so. 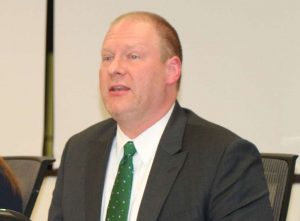 Iyer said Reston must remember it has the power to stand up to developers.

“The most common way people lose power is by thinking they don’t have any,” he said. “We do have a voice, and RA is on the frontline of that, so it is very important for us to organize our power and our ability together. The very first step toward a movement is to come up with a voice and speak out against [development at] St. Johns Wood, the Lake Newport soccer proposal, and [development at] Reston National Golf Course.”

Anguizola is the president of Reston Soccer and a driving force behind the Lake Newport soccer proposal, which has been tabled indefinitely by the RA board after a pushback from the community. He was the target of a question from an audience member regarding a potential conflict of interest he would have when it comes to the proposal.

“I think it’s impossible to have folks that are deeply engaged in the community that won’t have a potential conflict of interest when they are going to take office,” he said. “The right thing to do is disclose it in all of the annual disclosure documents, and number two, recuse yourself. … If that issue comes before me, or any other Reston Soccer issue, I will recuse myself from that, and every other candidate that has those issues should as well.”

When asked about the recommendations made in StoneTurn’s review of the Tetra/Lake House purchase, Iyer said he wants to see the Tetra Review Committee disbanded and the pro bono offer by community-based Mediaworld re-addressed. Two other candidates, Anguizola and Werner, said it is time to move on.

“We’ve made a bad decision — I don’t think anyone in this whole room is ‘yay’ for the Tetra deal — but we do have some recommendations,” Werner said. “There does have to be some accountability, but Reston does need to move forward and figure out, now that we have this property, how do we utilize it to the best of our association’s ability?”

Carr, who is chair of the Tetra Review Committee, said getting a firm handle on the Lake House’s financials is one of the main goals he has for this upcoming budget.

Voting will continue through April 3 and can be done by mail or at reston.org.

More Stories
In The Design Studio: Five Easy Steps to Best Organize Your KitchenWhat’s Going On Around Reston This Weekend?