Several years in the making, work will soon begin on construction of a 230,000-square foot senior living facility at a former site of the United Christian Parish church.

Ground is scheduled to be broken on the IntegraCare facility at 2222 Colts Neck Road on March 30. The project, expected to be completed by 2020, will include 91 independent-living units along with 79 assisted-living units, 24 memory-care units and 16 units for high-acuity patients. 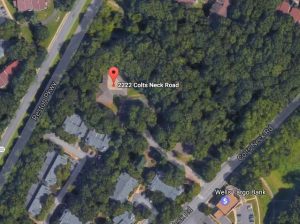 The building is to be constructed in two wings, one along Colts Neck Road and the other along Reston Parkway. The former church building still stands on the wooded site, the entrance to which is roughly across from the entrance to Hunters Woods Village Center. A permit application to demolish the building was filed March 9 with Fairfax County.

This will be Wexford, Pennsylvania-based IntegraCare‘s first facility in Virginia.