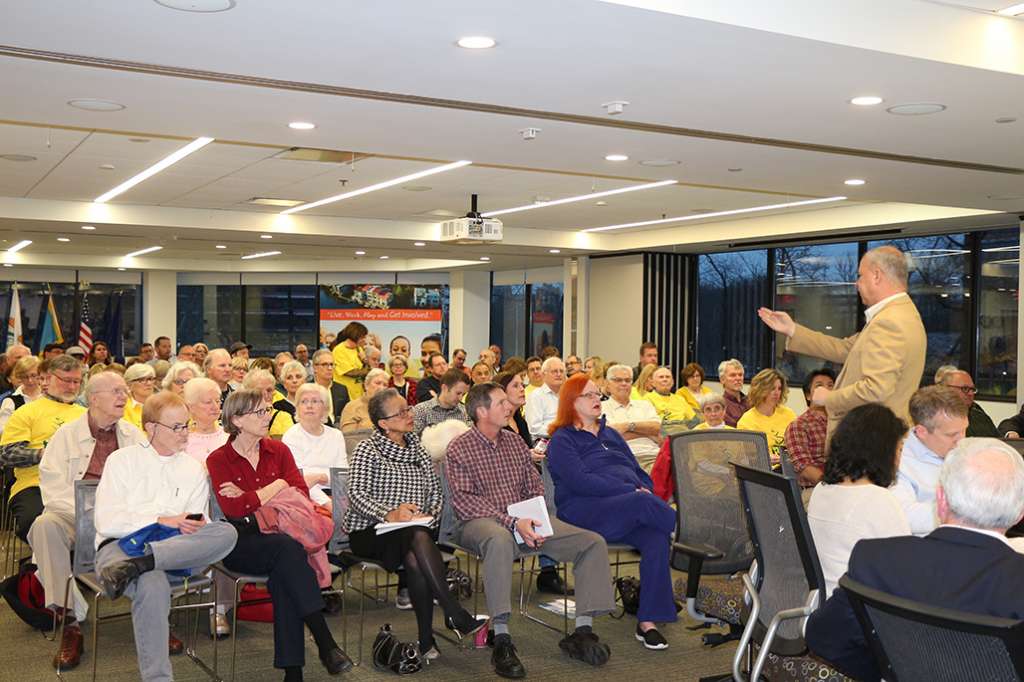 Bozzuto Management brought the seventh version of its plan to redevelop St. Johns Wood to the Reston Planning & Zoning Committee for a public information session Monday.

Dozens of community members, many sporting yellow “Reclaim Reston” T-shirts, were in attendance to hear what Bozzuto and the P&Z had to say, and to give their thoughts on the matter — which, for the most part, haven’t changed.

The latest incarnation of the developer’s plan for the community features 481 mid-rise, multifamily units in two buildings. All townhouses that had been part of previous designs have been removed from the plan. Heights of the buildings have been reduced “significantly,” according to Brian Winterhalter, Cooley LLP commercial real-estate attorney, who presented the plan to the committee.

With the changes, several members of the Planning & Zoning Committee said the developers are getting closer to where they need to be. But residents, who have been opposed to the project since it was first proposed in 2014, remained unwavering.

The development would top out at five stories at its center — and the property sits at the highest elevation in North Reston, concerned residents pointed out. 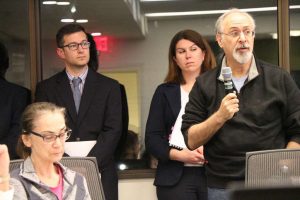 “Size matters” was the mantra of one resident who spoke, Bruce Ramo of Hemingway Cluster, who said Bozzuto’s proposal is “irreconcilably inconsistent with the Comprehensive Plan.”

“Size matters when you propose to place a nearly 60-foot-tall building on the highest point of the highest ridge in the area, so it towers above the surrounding neighborhoods,” he said while listing potential problems with the development. “There are more reasons to send the developer again back to the drawing boards — or preferably, back to Maryland.”

Residents and committee members alike questioned a lack of 3D renderings within the plan to better show what the impact on the surrounding community would be. Susan Mooney, a resident representing Reclaim Reston, showed a homemade 3D model to the audience while her husband John gave a presentation spelling out concerns. 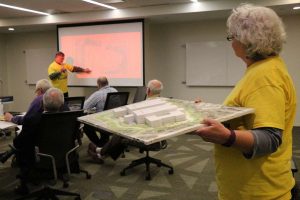 In addition, residents expressed displeasure with the architecture of the proposal, which they said doesn’t blend with other dwellings in the area and therefore does not meet Reston’s Comprehensive Plan. Also, residents and some committee members questioned the veracity of a traffic study cited by Bozzuto representatives that claimed there would be minimal effect on congestion in the area.

“You’re almost doubling the people, which doubles the vehicular traffic,” said committee member Jake Hovermale. “I find to hard to believe that you can add that many people but not affect the surrounding area.”

Bozzuto did not present the traffic study within its revised plan. P&Z Committee Chairman Jared Willcox asked that they do so when they return for the April 17 committee meeting. 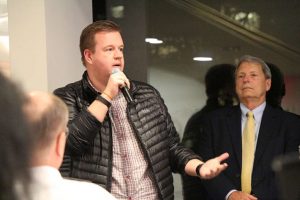 Winterhalter said 49 of the units in the proposed development would be for workforce housing and nine would be designated for affordable housing, per county regulations. He also said Bozzuto would be providing relocation assistance for current St. Johns Wood residents who would lose their homes.

Bozzuto was instructed by the P&Z Committee to address the questions raised during the information session and return with more details at the April meeting. The developer is also scheduled for an April 18 meeting with the DRB. A Fairfax County Planning Commission hearing on the project is slated for May 25.