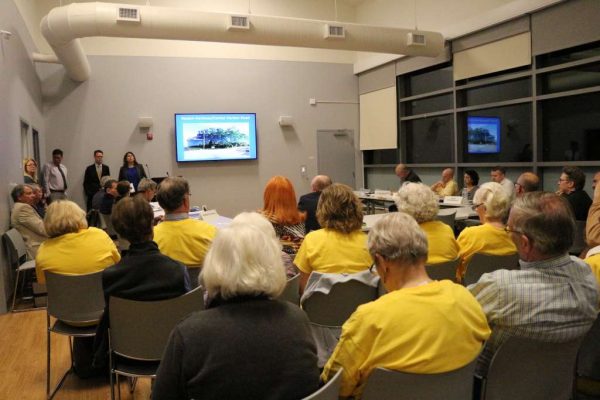 At Monday night’s meeting of the Reston Planning & Zoning Committee meeting, the message was tweaked — with a nod to Johnnie Cochran.

“In order for the developer to pack in the desired density, to squeeze in nearly double the current number of units and who knows how many residents, the developer again proposes a design that simply does not fit,” said Linda Platt, one of several members of Reclaim Reston who spoke in succession in a coordinated effort to fight the latest proposal. “And if it does not fit, they must quit.”

That rhyming phrase was repeated throughout Platt’s statement and was invoked by other speakers as well as community members had the chance to speak in response to Bozzuto during the latest informational meeting on the proposal. Bozzuto was presenting to the Planning & Zoning Committee for the sixth time since the project was first proposed in 2014; tonight, the proposal goes before Reston’s Design Review Board for the sixth time as well.

Brian Winterhalter of Cooley LLP, the commercial real-estate attorney presenting the plan on behalf of Bozzuto, told the committee Monday that the proposal to put 481 mid-rise multifamily units within two buildings is suitable for a property that was originally marked in the Reston Master Plan for high-density development.

There are currently 250 multifamily units on the 14.3-acre property.

The redevelopment proposal features 33.6 units per acre, which classifies it as medium-density. Winterhalter said the proposal is for about 60 percent one-bedroom units, with a third of the units having two-bedrooms and only about 5 percent with three bedrooms.

The issue that continued to raise the most questions from members of the Planning & Zoning Committee is the possibility of increased traffic congestion in the area, particularly at the intersection of Reston Parkway and Center Harbor Road. Jake Hovermale, the committee’s first associate member, said no matter what traffic figures are provided that claim there will be little impact, he has a hard time believing there won’t be backups.

“Anywhere between the a.m. peak hours and the p.m. peak hours, there’s an increase in trips [into and out of St. Johns Wood] between 240 percent and 280 percent,” Hovermale said, citing information in the proposal’s traffic study. “I just don’t see how you can increase it by that many trips, and have the infrastructure that exists today, [and] not really piss people off.” 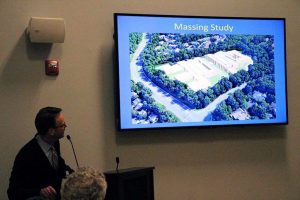 Winterhalter countered by saying there is already a large amount of traffic flowing through the intersection of Reston Parkway and Center Harbor Road today without any congestion. Adding a relatively small percentage of traffic from the complex, he said, would not affect that flow adversely.

But John Mooney, speaking on behalf of the Hampton Pointe Condo Association, claimed the traffic study used for the proposal was “inadequate” and “flawed.”

“[The traffic study used by Bozzuto] uses 2020 as their time horizon and seriously narrows their inquiry’s geographical scope,” he said. “It fails to consider the traffic impact on the SJW area of all future development in the three Metro station areas.”

Residents also continued to express their concerns about the overall height and mass of the project. Winterhalter showed images of medium- and high-density residential structures at Lake Anne, Tall Oaks, Hunters Woods, South Lakes and even elsewhere in North Point, and once again said St. Johns Wood is classified for such development under the Reston Comprehensive Plan, which was modified in 2014 and 2015. In addition, he said, the proposed height of the redevelopment is comparable to that of current buildings at the apartment complex.

Dabney Narvaez, though, was among the residents who spoke to say this development does not fit within the quaint surrounding neighborhood, and that all of Reston should be paying attention to what happens.

“You are setting a precedent which will affect not just the immediate neighborhood, but all of Reston,” she said. “Any residential area in Reston will be fair game for development of the kind Bozzuto is proposing here.”

The proposal is set to go before the Planning & Zoning Committee and the Design Review Board again next month, on May 15 and 16. A Fairfax County Planning Commission hearing on the project remains scheduled for May 25.