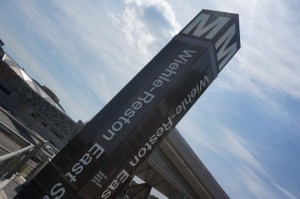 If you are planning to attend the People’s Climate Movement on Saturday in DC, traveling there by Metro may prove more difficult than expected.

Planned track work on the transit system this weekend will have the line between Foggy Bottom and Federal Triangle closed down, with work being done to replace ceiling tiles at Farragut West, McPherson Square and the lower level of Metro Center. Silver Line trains from Wiehle-Reston East will only be traveling as far as Ballston, leaving every 20 minutes.

Anyone traveling to downtown DC from Reston will need to transfer to an Orange Line train at Ballston, a Blue Line train at Rosslyn and then a Yellow Line train at the Pentagon. Stephen Cerny of Reston, a former member of Metro’s Riders’ Advisory Council who plans to attend the Climate Movement, is concerned that will cause major issues for those traveling in for the event from the area.

“Given that the march will draw hundreds of thousands, Metro is facing a public relations disaster given the disruptions it will cause and a loss of all the goodwill it earned for its excellent service during the Jan. 21 Women’s March,” Cerny said. “It’s very likely that the platforms will be severely overcrowded and will likely lead to service disruptions.”

Richard Jordan, a spokesperson for the Washington Metropolitan Area Transit Authority, said it is not anticipated that there will be any problems Saturday associated with the Climate Movement.

“Yes, just as there was track work during the Science March last weekend,” Jordan said when asked if Metro was aware of the maintenance work’s timing in relation to Saturday’s event. “We believe that planned service will be more than adequate to accommodate ridership demand.”

About 15,000 people attended the March for Science on April 22 at the National Mall. Cerny and other activists are hoping for a much larger turnout for the Climate Movement protest Saturday. Attendance for the Women’s March on Washington in January was estimated at over 400,000.

Helene Shore, co-founder of locally based environmental group 350 Fairfax, will be traveling to Saturday’s event on a bus along with other Reston-area activists. She said there has been “some talk” about concerns related to Metro service, but she remains confident there will be a large turnout from Fairfax County and beyond.

“They are expecting lots of people coming,” Shore said. “Buses are coming from all over the country.”

Silver Line trains from Reston will only travel as far as Ballston beginning at 10 p.m. Friday, through the close of service Sunday.