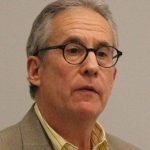 This letter was submitted by Reston resident Bruce Ramo. It does not reflect the opinions of Reston Now. We publish article and opinion contributions of specific interest to the Reston community. Contributions may be edited for length or content.

Too much, too soon.

This is the crux of the community’s concern with the proposed zoning amendments, which were the subject of a community meeting with Fairfax County Supervisor Cathy Hudgins on May 24.

Each day, many of us pass a dangerous portion of Wiehle Avenue near Sunset Hills Road where a pedestrian bridge is slated to be built someday. The area is the gateway between the Planned Residential Community of Reston (PRC) and the Metro station area with its thousands of new apartments and townhouses.

The missing pedestrian bridge is a symbol of all that is wrong with the County’s zoning amendment and the manner in which it would facilitate growth without the infrastructure to support it.

The proposed amendment would allow even more development throughout the PRC and elsewhere, but where is the pedestrian bridge? Where are the other new or improved parks, roads, schools and paths to service the higher density? Why is the County pressing to facilitate more growth in Reston, but not balancing the growth with near-term action to make that growth safe, convenient and sustainable? Why is Supervisor Hudgins content to tell Restonians that infrastructure is not her job, as she did [Wednesday] night?