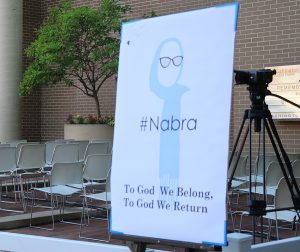 The possibility that 17-year-old Nabra Hassanen was sexually assaulted during the events leading to her death is being investigated, police say.

Edwin Roessler, Fairfax County Police Department chief, told media prior to the start of a vigil in Nabra’s honor Wednesday that test results are being awaited before any official statement can be made.

“At this point in time right now, it’s an active investigation,” Roessler said. “We’re pursuing that possibility [that a sexual assault happened], but we have to wait for forensic examination results and the report of autopsy from the medical examiner to confirm whether or not that took place.”

The assaults Nabra suffered prior to her death were “one continuous event” that began in Fairfax County and ended in Loudoun County, Roessler said. He reiterated once again, emphatically, that no evidence has emerged that points to the killing as being a hate crime.

“Right now, that is a myth on social media,” Roessler said. “There is no evidence at this point in the investigation, at all, that this was hate-motivated.”

Roessler said if anyone has information that would point toward the crime being bias-motivated, he wants to hear it. But he shot down several questions from media regarding rumors about the suspect’s motives.

Imam Mohamed Magid of the All Dulles Area Muslim Society expressed his confidence in the work of the Fairfax County Police Department, and he thanked them for all they have done already to help put the pieces together.

“We are so glad that they were able to find [the suspect] and get him into custody very quick,” Magid said. “The community has trust in [the police] in this investigation. They told us they will not leave any stone unturned in this investigation, and we appreciate that.”

The suspect, a 22-year-old Salvadoran national named Darwin Martinez Torres, remains in custody at the Fairfax County Adult Detention Center. He has a court date set for July 19.

More Stories
Del. Ken Plum: Looking Ahead to the November General ElectionsGarage Parking is Free for Jackson’s Customers… But How Does It Work?