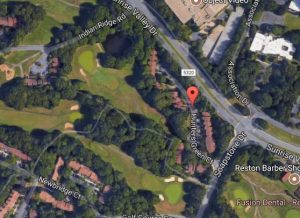 The Fairfax County Police Department was summoned to a Reston residence after a swastika was found painted nearby.

According to a report, the graffiti was discovered in the 11600 block of Hunters Green Court. A police spokesperson says the residents aren’t sure when it was painted, but that it happened sometime between July 1 and July 6.

“It was discovered on a wall behind the house,” the spokesperson said. “The homeowners couldn’t think of anyone who would put that there, and that’s the only one that was reported.”

Hunters Green Court is located off Soapstone Drive, near Sunrise Valley Drive. The 16th hole at Reston National Golf Course is nearby.