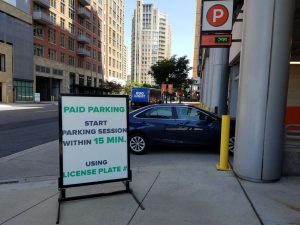 After repeated member comments on the issue, the Reston Association Board of Directors will consider taking a more aggressive role regarding the paid-parking situation at Reston Town Center.

According to the agenda packet for Thursday’s meeting of the Board, they will consider moving “to authorize Reston Association (RA) Board President Sherri Hebert and Vice President David Bobzien to engage with representatives of Boston Properties and Reston Town Center (RTC) to inform and discuss with them the pressing requests from RA Members that further consideration be given to RTC’s paid parking system.”

In her statement, Zurn — who has created an online petition about the issue that has nearly 10,000 signatures — argued that the ParkRTC system has negatively affected the Reston community.

“Not only is the system complicated and the data tracking creepy, it’s also deterrent for attracting new or occasional visitors,” Zurn said. “The livelihoods of our neighbors who work there and its local business owners have been hurt by significant reductions in revenue, fewer work hours and dramatically less tips. One only needs to look at the barrage of negative comments that appear on every RTC Facebook post to understand how the community feels.”

As of June 5, Boston Properties stepped back from 24/7 paid parking at RTC, allowing for free garage parking after 5 p.m. each day, along with one hour of free parking prior that time. Monday morning, Reston Town Center posted on its Facebook page that its parking garages now feature “easier-to-use” park-and-pay kiosks that do not require use of the ParkRTC app.

Reston Town Center is not under the purview of Reston Association; however, Zurn says she is hopeful RA can “engage in the conversation and use [its] clout to convene a community conversation about parking at RTC.”

Among other topics at Thursday’s meeting:

Reston Association’s Board of Directors will meet at 6:30 p.m. Thursday at RA headquarters (12001 Sunrise Valley Drive), and the meeting will also be broadcast live on RA’s YouTube channel.