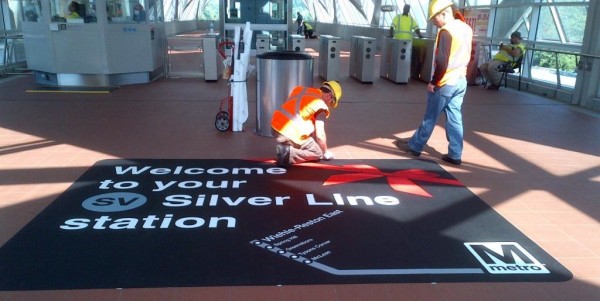 Silver Line Struggling to Maintain Riders — Phase 1 of Metro’s Silver Line expansion fueled an unprecedented building boom in areas adjacent to its five stations, the Washington Post reports. However, the line has struggled to attract riders in the three years since it opened. Only the Wiehle-Metro East station is even close to projected ridership numbers. [Washington Post]

Remembering Bob Simon — In a piece for an English-language Indian newspaper, Manish Nandy remembers the stories Bob Simon told him during daily walks around Lake Anne. [The Statesman]

‘White Liberals Give Themselves Too Much Credit’ — In an opinion piece for an “intersectional feminist” magazine, a Restonian looks back on the death of Nabra Hassanen, saying that hate lives here and everywhere. [Wear Your Voice]

Work Today at Park & Ride — The access road to the Herndon-Monroe Park & Ride will have daytime lane closures for paving from 9:30 a.m. to 3 p.m. today. Drivers should watch for flaggers, who will help direct traffic around the lane closures. [Fairfax County]

Teavana Stores Shutting Down — Starbucks announced last week will close all 379 of its Teavana stores, which it says have been underperforming. This will include the store in Reston Town Center (1826 Library St.). [CNN Money]

Get Ready for Terraset — All rising Terraset kindergarteners are invited to the Terraset playground from 5:30-6:30 p.m. on Wednesdays in August to meet classmates and play on the new Terraset playground. The August kindergarten play dates are sponsored by Terraset Elementary School and Terraset Elementary Parent Teacher Organization (PTO). Representatives from the PTO will be on hand Aug. 2 and Aug. 9 to answer parent questions. No RSVP is required. [Terraset Parent Teacher Organization]