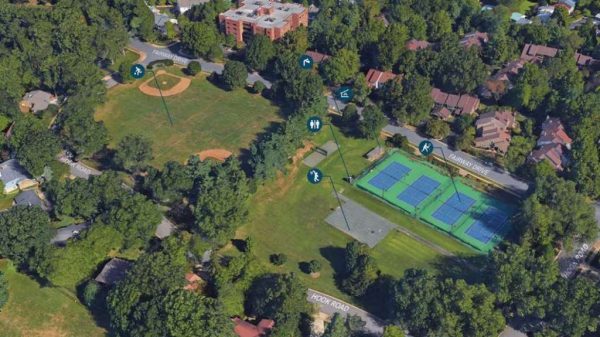 During a community meeting earlier this week (video) on a future Hook Road Recreation Area capital project, residents provided their thoughts on what should — and should not — be done at the park.

Hook Road Recreation Area was selected by RA’s Parks & Recreation Advisory Committee as the pilot project for “full-facility enhancement” after multiple facilities were evaluated in 2016. The idea is to take a facility that has pieces of replacement work in the plans in the capital reserve study and, instead, consider comprehensive work to upgrade the facility all at once.

Tuesday’s meeting was a kickoff to the project, sharing information with the community and beginning the process of gathering input. In between tense moments at the meeting, many residents of the community said they appreciated the effort Reston Association is undertaking to engage the community from the very start of the process. 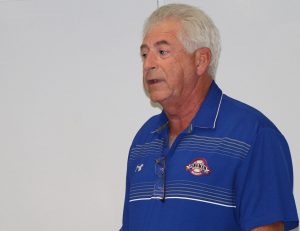 “We all know, living in Reston, things change,” said John Pinkman, of Rescue Reston. “Things have to improve if we want to keep our property values as high as they are, [so] I really encourage this process.”

Dan Pennington, president of the Orchard Green Cluster Association, asked for clarification on what has been identified by Reston Association staff as “aging components” of the park that require attention. Garrett Skinner, RA’s capital projects director, said everything at the park falls into that category.

“Nothing has been replaced — in terms of the tennis court, the ballfields, the multipurpose court — since 1975,” Skinner said. “Many of these features are all kind of due for rehab around the same time, and this will be a good opportunity to look at everything as one facility instead of the previous methodology for us, [which was] just to fix little things as they’re needed.”

Concerns about parking and restroom facilities at the park are among those that have been brought up in one way or another regarding the project. Upgrades to facilities including the baseball field have also been mentioned by community members.

At Tuesday’s meeting, design consultant Dewberry was introduced to members, and its representatives shared information about the studies that have been done so far and how community input will be used as the project continues to be studied and eventually decided upon. A representative of PRAC also shared information, as did Skinner.

The question was raised of whether the fact that $50,000 has already been allocated from the Repair & Replacement Reserve Fund to develop plans for Hook Road means a “very large” project is being envisioned.

“What you saw tonight from Dewberry, all of that work, that’s where we allocated that $50,000 — all the data gathering, all the community input, all the research they’re doing,” said Sherri Hebert, president of RA’s Board of Directors. “There is no design [yet]. It could be anything from a small little thing to whatever the community wants. There’s nothing out there yet.”

Saying the current RA board is “very conservative” when funds are concerned, Hebert said a large-scale project is not anticipated.

“What will be different this year is an iterative process between the Working Group … and the Board,” Hebert said. “It’s not going to come back with this big project. … Nothing will be a surprise with the community.”

The Hook Road Working Group will be tasked with making a proposal to the RA Board on the project’s scope early next year. Applications for the group are currently being accepted, and interviews will take place in October.

Hook Road Recreation Area has about $122,000 in as-is maintenance expenditures scheduled through 2020, RA CEO Cate Fulkerson said previously. Skinner said full replacement of every aspect of the park would cost around $620,000. Sridhar Ganesan, treasurer of the RA Board, said no budget is currently set aside for the proposed capital project.

In the wake of recent controversies including the Tetra/Lake House purchase, residents such as Laurie Dodd said they are thankful RA is taking a more serious approach about incorporating the community in discussions such as this.

“I would rather spend $50,000 on getting community input and participation in the plan than run the risk of bad decision-making,” she said. “Democracy and public participation cost money, so I think we need to let the light shine on RA processes.”

Many residents who spoke said that while the park has a lot of strong qualities as it sits, they are not averse to thinking about ways it can be improved.

“[The park] works really well, and there’s an adage of ‘if it’s not broke, don’t fix it,'” said Jay McCracken, of South Shore Drive. “But we have to be open to change as well.”

Not everyone is convinced, though.

“It’s a beautiful green space, and RA maintains it very well,” said Tom Brady, of the Waterford Square Condominiums on Fairway Drive. “[Now RA is] spending $50,000 to plan for something that really doesn’t need to be done, especially because Reston Association ratepayers are feeling more and more squeezed.” 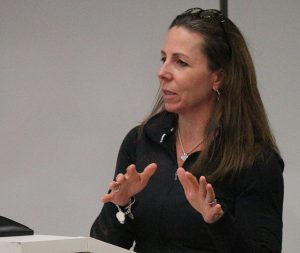 Anna Lowit, of Hook Road, said the park is a treasure of the community and that is extremely well-used, but there are maintenance needs and upgrades that can be made. However, she said any changes that are made should be a focus on needs, not on wants.

“[We must] make fiscally responsible decisions — not that we’re sitting on money that we can spend, and we can spend it so let’s just buy something,” she said. “Upgrading and maintaining the things that we have is the best way to spend our money.”

Future community work sessions and roundtable events on the project have been tentatively scheduled for Oct. 4, 10 and 24. Members who would like to receive updates about the process can join the mailing list by emailing [email protected].

Irving Middle School students wear face masks in class (via FCPS) When students across Fairfax County returned to classrooms today (Tuesday), they came wearing the most contentious, must-have accessory of…