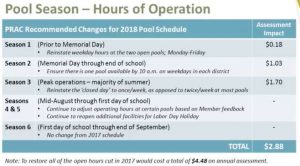 Some pool hours that were lost in the 2017 schedule may return in 2018, after recommendations from Reston Association’s Parks & Recreation Advisory Committee (PRAC).

During their special budget session Monday afternoon (video), the Reston Association Board of Directors voted to guide staff toward listening to PRAC’s recommendations when setting guidelines for the 2018 pool schedule.

The recommendations are to:

The suggested changes would add $2.88 to the projected assessment rate for 2018, RA staff has calculated. Restoring all of the pool hours that were cut in this year’s schedule would tack on an additional $1.60.

“The recommendation that is before you, by the Parks & Recreation Advisory Committee, was worked on with staff,” CEO Cate Fulkerson said, addressing a director’s question about concerns with finding seasonal workers for the pools. “Staff believes that it can achieve [these changes, but] it does not believe it can go back to the full-scale set of hours that we had in 2016.”

Members provided feedback about pool hours during listening sessions held by RA directors in May and June. In addition, member feedback on the issue was collected during a feedback session with the Board earlier this month. Fulkerson said about 25 members attended and shared their thoughts.

Director Julie Bitzer (South Lakes District) is the Board’s liaison to PRAC. She said she believes the recommended changes address the majority of comments that were received about the schedule.

Also at Monday’s meeting, the Reston Association Board of Directors voted to give their backing to:

The Board also discussed the potential of adding a post-DRB project approval inspector, whose job would be to “ensure that members have built their DRB approved projects in accordance with the plans and specifications submitted to the DRB for approval.” Adding the position would have a $2.65 impact on the projected 2018 assessment rate. The Board chose to defer making a guidance decision on that position until their Sept. 28 meeting.

Directors also discussed a member request to stop mowing medians, which would save RA about $54,860 and reduce the 2018 assessment rate by $2.60. Directors agreed that as the Virginia Department of Transportation would only do the work three times a year, as opposed to the 16-18 times a year it is done by RA, discontinuing the effort at the local level would seriously harm the appearance of the community. The Board voted not to back the recommendation.

All votes at Monday’s meeting were for guidance purposes only as the second draft of the budget is compiled. No official decisions have yet been made.

Board guidance on the second draft of the 2018 budget must be completed at their Sept. 28 meeting. Another community budget session is slated for Sunday, Oct. 15, followed by public hearings on Oct. 26 and Oct. 30. The budget is to be approved, and the assessment rate set, during the Board’s Nov. 16 meeting.