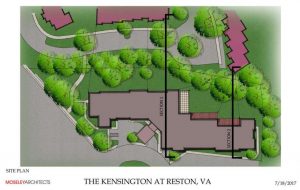 Despite statements from local residents to the contrary, Reston’s Design Review Board says a proposed senior-living facility on Sunrise Valley Drive will be an appropriate addition to the community.

During their meeting Tuesday (video), the DRB voted 4-2 to give conceptual approval to the Kensington Senior Living project, pending final architectural drawings. The facility would be constructed at 11501 Sunrise Valley Drive, which is the current home of Good Beginnings School.

After previous designs for the property were for a building of up to 91,000 square feet and five stories, the developers have brought their proposal down to about 65,000 feet and two stories. However, residents of adjacent Wethersfield Cluster say they have concerns that even a two-story building will result in their privacy being disturbed.

“I can still see sight lines from the second floor into our first-floor rooms,” said Thea Kreinik, of Approach Lane. Kreinik and other residents said having the building so close to their properties would also have a negative effect on their property values.

Following comments from numerous residents about the use of the property, which is outside the DRB’s purview, vice chair Richard Newlon said he doesn’t agree with their assertions that an assisted-living facility is a bad fit.

“You have room there to build 30 townhouses, something like that,” Newlon said. “The residents of this facility are not going to be driving in and out all the time, the parking is underground, there’s not going to be a lot of traffic outside, [and] people in this type of facility are probably not going to be out in that backyard playing volleyball and making a lot of noise.”

One resident who spoke following the Board’s discussion said the “better this than that” mentality does not sit well with the community.

“The impression I’m getting from the Board — your kind of thinly veiled comment to us — is, ‘Suck it up with this old-folks home, or you’re going to get something worse,'” said Lisa White, of Wethersfield Court. “That’s not making me feel comfortable.”

The issue of lighting from the facility affecting nearby residents was also brought up, and the developers were told by DRB to “be cognizant moving forward” to address the issue.

Residents of the cluster who attended the meeting and spoke out against the project let their displeasure be known as they exited the room following the vote.

“I hope all of you [who voted for it] get one on your doorstep,” one member could be heard telling the Board following the passage of the motion.

The Kensington Senior Living facility is planned to include 96 beds within 70 units. It still must receive additional approval both locally and at the county level.