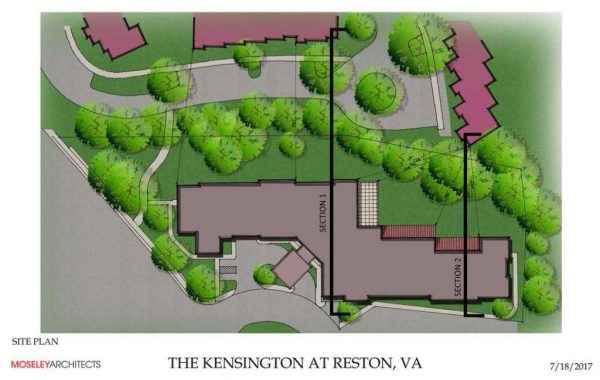 Before its meeting tonight, Reston’s Design Review Board will have another one-hour work session with the developers of the proposed Kensington Senior Living at 11501 Sunrise Valley Drive.

Following a work session with the DRB in May, Kensington has made the following changes to its plan to reduce the project’s size:

Previous designs for the proposal featured as many as five stories.

The facility would be at the site of the current Good Beginnings School. The property has not yet been sold, with the deal contingent upon the plan’s approval.

At the May work session, residents of the Wethersfield Cluster expressed their concerns about lowered property values, privacy and architectural compatibility. Kensington says it “has considered and is working through different architectural styles, and it “plans to present more detailed building elevations” during tonight’s session.

The documents that have been provided prior to tonight’s session are available here.

The discussion is scheduled for 6 p.m. at RA headquarters (12001 Sunrise Valley Drive). The DRB’s regular meeting will begin at 7.