The Reston Association Board of Directors discussed changing its code of ethics and conflict-of-interest policy during a special session Monday (video).

The Board’s ethics subcommittee, formed in May, consists of directors David Bobzien, John Mooney and Victoria White. In information presented by Mooney, it was spelled out that the revised code of ethics would focus on “a structure for managing any personal interests of RA officials that might conflict with those RA interests that the officials have a duty to serve, whether that duty is defined by laws and RA governing documents or by broader ethical norms.” 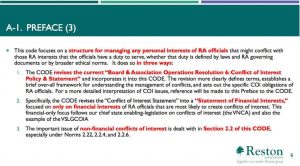 The norms, White said, involve respect for each other, dedication to the common good, stewardship of resources, respect for the truth, respect for the law and competency. Full details about what these each of these norms entails can be viewed in the board packet provided for Monday’s meeting.

The ethical culture, Bobzien explained, should be refined by using the power of example, using collegial feedback, inviting the RA community to hold the Board responsible, and continuing “ethical formation” and training. Bobzien also said RA should form an Ethics Review Committee, consisting of two RA directors and three members, to hear complaints.

“They would serve for staggered terms of three years, and they would be selected by two-thirds vote of the Board of Directors,” Bobzien said. “They would draft bylaws that would then be approved by the Board, and after that they would be ready to receive complaints.”

(Sridhar Ganesan, treasurer and At-Large director, suggested directors should not get a three-year term on the review committee, but rather should change yearly. The Board discussed the idea and agreed to consider it further before the amended code is voted upon.)

If a complaint is deemed credible, a formal hearing would be held. The committee would be given the discretion to rule on the complaint, and could potentially go as far as to call for removal of a director from the Board if such action is deemed warranted.

Mooney said the revised code is intentionally tough on issues of transparency and accountability.

“We stand behind the recommendations, and I do not want to hide the fact that it’s a tough set of expectations that it sets out for the directors and for the officers,” he said.

In addition to the Board of Directors and its officers, the code of ethics would also apply to CEO Cate Fulkerson. Fulkerson suggested it also include in-house counsel, who will report to the Board. 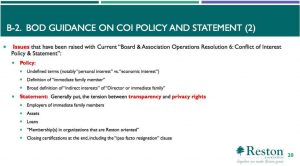 In regard to conflicts of interest, the committee recommended changes to the COI statement be made including:

The community will also be given an opportunity to comment on the proposed amendments, Mooney said, and sessions will be held to collect that feedback. The refined code of ethics and conflict of interest policy are scheduled to be voted upon at the Board’s December meeting.

END_OF_DOCUMENT_TOKEN_TO_BE_REPLACED

More Stories
Friday is ‘Car-Free Day’ in Fairfax County, DC MetroThanks to Our Sponsors and Advertisers