Reston’s newest piece of public art was unveiled Thursday evening in front of one of its newest luxury-living facilities. 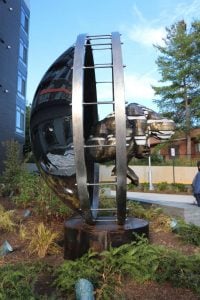 “Convergence,” a bronze and stainless steel work that shows a human figure emerging from the lens of a camera, was debuted in front of a cheering crowd at Aperture (11410 Reston Station Blvd.). The 11-foot-tall bronze sculpture, displayed at the intersection of Reston Station Boulevard and Metro Center Drive, was created by Reston-native artist Zachary Oxman. Oxman was also the sculptor of Lake Anne Plaza’s “Untold Stories” (aka “Bronze Bob”) and has had his work commissioned by DC officials and presented as diplomatic gifts.

“This opportunity is very unique and very special to me, because I do have such a strong connection to Reston,” Oxman said. “Public art has a unique way of not only adding visually to a community, but it also offers the opportunity to share stories about life and to inspire personal thought and reflection for those who experience the art.”

Oxman said “Convergence” tells a story about the “imperceptible and fragile point that exists between having an idea and actually pushing it forward and becoming a reality,” to which he drew parallels to Bob Simon’s vision for the community of Reston.

“Convergence” also keeps with the theme of photography that spawned Aperture’s name, said Chuck Veatch, president of the Charles A. Veatch Company.

“The pure scale and power of the work and its obvious — at least to me — depiction of the creative process and the art of photography … I was fascinated,” Veatch said of first seeing the piece at Oxman’s studio. “It needed a place of prominence.”

In addition to his commercial real-estate work, Veatch is chairman of the board and contributing editor for Nature’s Best Photography magazine.

Bozzuto’s new seven-story building a stone’s throw from the Wiehle-Reston East Metro station is slated for an official grand-opening in the spring, representatives said during Thursday’s art dedication. The apartments are now leasing.

For more photos from the event, visit Chip McCrea Photography.