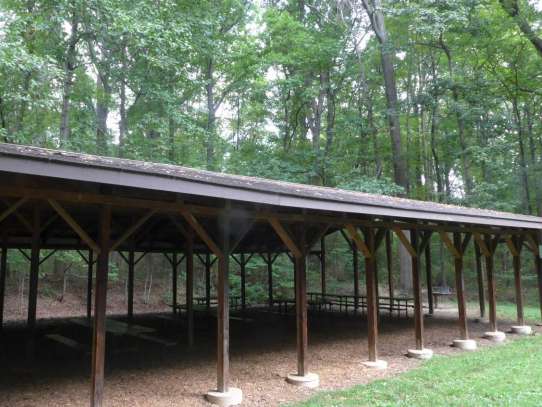 After hearing a report on the latest plans for a capital project at the Pony Barn Pavilion, the Reston Association Board of Directors still had a lot of questions.

At their meeting Thursday (video), directors heard from Chris Schumaker, RA’s capital operations manager, who presented the most recent information gathered on the project. Schumaker presented the project budget overview, proposed scope options, DRB recommendations for Pony Barn, and a structural analysis of the site.

The Pony Barn pavilion replacement was first approved by RA in 2013, at a cost of $30,000. RA later approved, as part of the 2016-17 capital projects budget, $350,000 for a full-scale renovation project. That money has been locked up since last July, however, when RA put major capital projects on hold in the wake of the controversy over the Lake House purchase.

As the Pony Barn Working Group seeks those funds to be released so the project can get underway, the Board is being presented with four options for the project, with playgrounds and handicap-accessibility being the main variables. 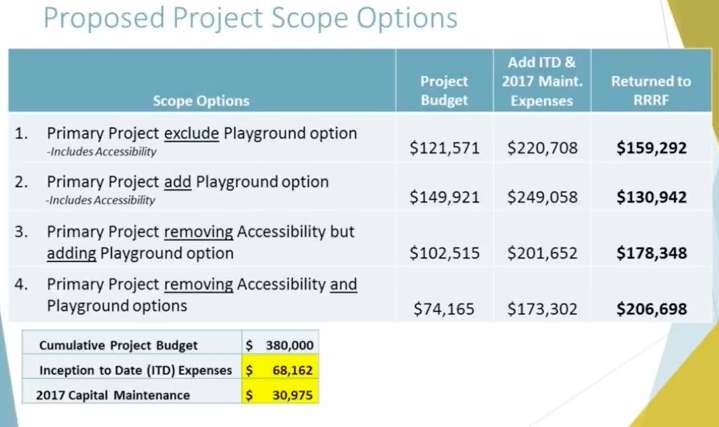 Residents with disabilities have been particularly vocal about their desire to see the facility upgraded to become accessible to them. At Thursday’s meeting, a video of nearby resident Audrey Diggs was shown, demonstrating her inability to access the park with her two children. 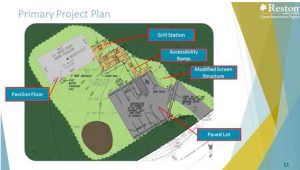 While directors agreed accessibility is an important goal for the project, some were displeased by the ramp design included in the proposal, which features up to 7.5 percent grade and multiple switchbacks. Larry Butler, Reston’s senior director of parks, said the Working Group emphasized minimal impact to trees and green space, which resulted in the presented design.

“I really don’t like what it looks like, especially in a natural setting like this,” said John Mooney, North Point District representative. “You talk about it being landscaped better, and perhaps that would be possible [but] I would love to see an elevation view.”

All plans on the site would need to receive final approval from Reston’s Design Review Board.

A recent DRB inspection of the site showed visible erosion and exposed soil; discolored, damaged, rotted and mismatched portions of the pavilion; an incorrectly installed entrance kiosk; and unapproved removal of the tot lot. The roof also missed a scheduled replacement in 2014, as it has been delayed in anticipation of the renovation project, and a drainage pipe beneath the entrance is in need of replacement.

A structural inspection of the site by engineering firm Keast & Hood reported the overall structure to be in good condition. However, directors questioned whether it may not make more sense to tear down the aging pavilion and build a new one from scratch that better meets the needs of the community, including those with disabilities who may have difficulty maneuvering around posts in the pavilion’s center.

The Board decided to ask staff to come back in October with cost estimates for other ramp options, as well as for options to replace and/or redesign the pavilion itself. Victoria White, Hunters Woods/Dogwood District representative, emphasized that any redesign of the facility would need to be of a similar rustic character.

The Board also passed a motion, presented by Mooney, indicating that it recognizes the need for a “useful, beautiful” facility on the site that is accessible with appropriate playgrounds or tot lots, and it wants to do that “as soon as we can responsibly.”