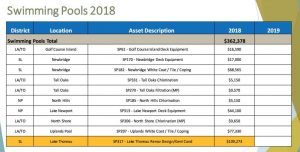 Major upgrades to swimming pools are proposed in the budget that is under discussion by the Reston Association Board of Directors.

All 15 RA pool facilities have projects listed in the proposed list. By far the most expensive is work on the Lake Thoreau pool, totaling just over $1 million.

The $1.8 million in proposed work on all pool facilities equates to 26.6 percent of the $6.7 million funding allotted for the Capital Projects List. The proposed budget also allots a total of $2.9 million for the Repair and Replacement Reserve (RRR) Fund, out of the $14.3 million in total overall expenses.

Some other big ticket items on the project list include: 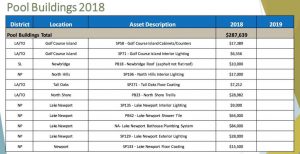 The next opportunity for Restonians to provide feedback to RA directors about the biennial budget is this Sunday. The RA is hosting a “community drop-in” at the Lake House (11450 Baron Cameron Ave.) from 10-11:30 a.m.

The RA Board has been discussing the budget since this summer in order to reach agreement before a November deadline. Sridhar Ganesan, RA Board at-large director and treasurer, questioned the various costs of the swimming pool facility repairs during some of those discussions, including at a special budget session last month (video).

“Plumbing in one facility isn’t going to be the same costs as the other, just because of the differences in configuration and size,” Garrett Skinner, RA director of capital improvement planning and projects, said in response. “All of those numbers were also vetted through contractors. Especially the pool buildings and swimming pool members. We had contractors come out and go physically through each one of the sites, look at what we have scheduled that needs to be done and determine costs based on that.”

Skinner, who was hired in January, also emphasized that some of the repairs were not anticipated in the association’s capital reserve study the was last performed in 2015. The study tracks needed maintenance and upgrades for RA-owned facilities. Instead, the repairs on the swimming pool facilities were proposed to be done during the next two years because the systems had broken down in some way. 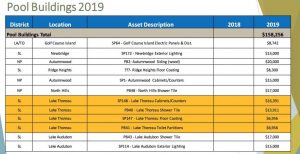 Skinner said Ganesan was correct, adding that the maintenance is necessary.

“Not all of these things were appropriately identified in the reserve study, but we still have to maintain them and repair them,” he said.