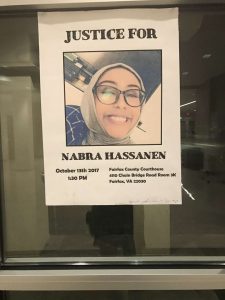 Those seeking justice for the murder of Nabra Hassanen, whose death rattled the Reston community this summer, will have their first day in court this week.

A preliminary hearing for the Office of the Commonwealth’s Attorney’s prosecution of murder suspect Darwin Martinez Torres, 22, will be on Friday in Fairfax County Juvenile and Domestic Relations District Court.

Judge Kimberly Daniel will preside over the hearing for the court, according to Rae Ann Stein, who works for the Fairfax County Court Services Administration in records management. The Juvenile and Domestic Relations court has jurisdiction over juvenile matters, including offenses committed by adults against juveniles under the age of 18.

Torres is charged with killing 17-year-old Hassanen of Reston on June 18 in what the Fairfax County Police Department calls a deadly case of road rage. She was a sophomore at South Lakes High School. 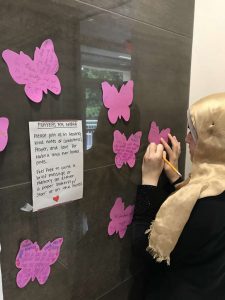 Police say Hassanen was part of a large group of teenagers walking and biking on Dranesville Road at about 3:40 a.m. after a Ramadan service at the All Dulles Area Muslim Society. The suspect allegedly approached the group in a car and argued with a teenage boy. The group scattered, but police say Torres caught up a short time later armed with a baseball bat. Hassanen was struck and taken in the car. Her body was discovered later that day in a Sterling pond.

Torres, who is a citizen of El Salvador and was living in Sterling without legal permission, had a detainer request lodged against him by the U.S. Immigration and Customs Enforcement agency.

Hassanen was laid to rest as a martyr of her Muslim community on Wednesday, June 21. Later that same day, the community packed into Lake Anne Plaza for her vigil.

Torres was incarcerated at the Fairfax County Adult Detention Center without bail, according to police. Authorities are seeking the harshest punishment, while many in the community are calling for the murder charges to be elevated to a bias-related crime.