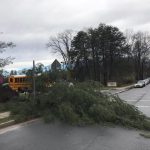 15. The impending closure of Il Fornaio, a California-based Italian restaurant that opened its first East Coast location in Reston, brought in 7,546 views. The store was located in the Retail at Midtown block of Reston Town Center, which has a free parking lot for customers.

14. A story announcing Cava Mezze Grill’s plans to come to 1815 Fountain Drive drew 7,735 page views. The storefront near Best Buy was previously the home of a Lane Bryant clothing store before it closed last year.

13. A sponsored post on how to spot when a cat is in pain was popular among readers. The post by the owner of Just Cats Clinic in Lake Anne Plaza had 8,281 views.

12. The death of a pedestrian in late February who was hit by a car along Reston Parkway and South Lakes Drive had 8,468 page views. The woman was pronounced dead at the scene.

11. A small tornado touched down in Herndon in April. Although the tornado was classified as the lowest-impact tornado possible, it toppled trees in Reston and the surrounding area. The news attracted 8,688 page views.