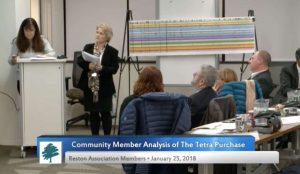 A year-long study of Reston Association’s $2.65 million purchase of the Tetra property raises blistering concerns about the process that drove the controversial decision and cost overruns linked to the building’s renovation.

The critique, led by two Reston Association members, uses a trove of documents, interviews and an electronic paper trail to chronicle decisions that led to the purchase in 2015 after months of community debate. The purchase price was nearly double the most recent tax assessment and renovations to transform it into The Lake House have cost three times more than expected.

Members Moira Callaghan and Jill Gallagher found that RA’s Board of Directors, Chief Financial Officer and members were not privy to major decisions involving the purchase. The general contractor hired for renovations was a former employee of the project manager Cresa – raising a potential conflict of interest. The Tetra project was the contractor’s first job and Cresa did not initiate a formal request for bids, according to the review.

External players like the property’s owner and contracted staff, who often seemed to drive decision-making more than staff and the board, led discussions “with very little oversight.” In some cases, the members found very few documents – or none at all – supporting decisions made, the review found. 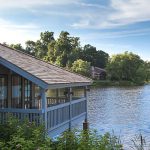 Gallagher, a management consultant and former budget analyst, was part of a Mediaworld Ventures LLC, which offered a proposal to complete StoneTurn Group’s work for a $1 fee. The proposal was abandoned after finger pointing.

They said their intention was not to assign blame. Their review, which they acknowledged reached conclusions limited by the information available or disclosed, was instead intended to offer a case study for lessons learned.

“Our goal is to provide the RA Board and community with our observations about the purchase, patterns of activities, and recommendations that we hope will spur further improvements in how RA manages itself and our assessment dollars,” Gallagher said.

The review also indicated several high-ranking individuals like the CFO and general counsel at the time flagged concerns about the high purchase price. In December 2014, the CFO at the time wrote the property seller would be “hard pressed” to find a buyer willing to pay $2.65 million. After reviewing monthly operating costs, the CFO also projected a potential deficit if RA proceeded with the purchase. 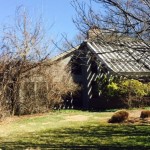 Even the property seller expressed concerns that the appraisal would not meet the asking price, according to the review.In some cases, critical decisions seemed to happen without the board’s input or knowledge. For example, the board was not made aware of discussions between the property seller and RA staff regarding negotiations until January 2015.

Other highlights include the following:

RA’s board of directors heard the findings Thursday night. President Hebert said she was “blown away” and needed time to digest the work.

“We cannot pretend as though we did not hear this,” said board member John Mooney.

A video of the presentation before the board is online.