Eric Lundberg, an engineer by training, began dabbling with pretzel recipes in his Reston home. The hobby, which he hoped would build bonding time with his daughter as she went through high school, transformed into something bigger: a locally-owned bakery called Nordic Knot.

His production quickly overwhelmed the countertops of his home, which he had certified for the business. After a temporary stint operating through Lake Anne Brew House, Lundberg has found a permanent production site for his bakery just two doors down from the business that drove his success, the brewhouse.

“This was a complete departure from what I’ve done before,” Lundberg said. “I’ve taken something I enjoy and turned it into a good product.”

The store on 11412 Reston Plaza West operates as a production center since late last year. Lundberg and Melissa Romano, the brewhouse’s co-owner, hope to establish a store in the spring. For now, they’re taking online orders, distributing wholesale and delivering locally. 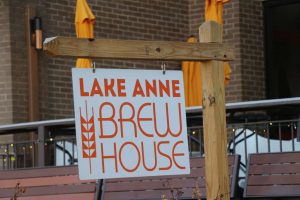 Their business partnership grew from the moment Lundberg came to Romano with a brown paper bag full of pretzels and a business pitch before the brewhouse opened. Retail sales ran through the brewhouse since it opened in 2016.

“The pretzels were so amazing it was not a hard decision to forward and team up with Eric,” Romano said.

Nordic Knot also sends out an electric scooter to deliver locally on bike trails in Reston — an effort to embrace the “progressive” and “forward-thinking” feel of the community, Lundberg said.

They hope to open a storefront where customers can walk-in to place orders and take a bite sometime in the spring.