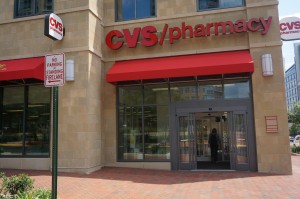 Fairfax County police are searching for an armed man who robbed the CVS Pharmacy in Reston Town Center Sunday afternoon.

Police said the man showed a gun and took cash and property from the store at around 1:40 p.m. He was described as a white man wearing a green jacket and tan pants, police said.

In a separate incident in the Herndon area, two suspects stole cash from victims who were trying to buy a phone on Sunday around 1 p.m.

The suspects, who were dressed in dark clothing, displayed a weapon and demanded money as the victims negotiated a price for the phone. They were described as black men between the ages of 19 and 25.

The incident comes as local police warn of 20 home break-ins between September and January. The break-ins in Reston and Herndon follow a similar pattern. Homes, town homes and apartments near a walking path or woods were robbed, but local police declined to disclose how the reports may be connected.

FCPD also reported the following incidents in the past week:

More Stories
Reston Community Center Seeks Input on PrioritiesReston Real Estate: Plain on the Outside But… Is There a Surprise Inside?