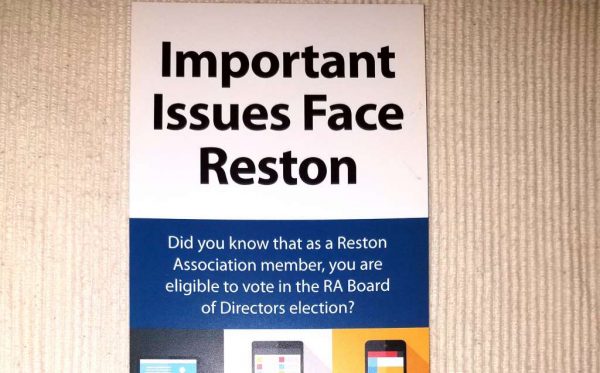 The beleaguered issue of lower voter turnout, which has hovered between 11 and 19 percent over the last four years, belies the importance of the election. RA commands an $18 million budget, funded in part through assessments from property owners.

In recent years, RA has pushed to boost voter turnout. Last year, nearly 19 percent of eligible voters participated in RA’s election for the Board of Directors – departing from a trend where turnout remained around 14 percent the three years prior.

But RA staff and residents say much more remains to be done.

“It’s not so much that people are not aware that it’s not happening,” Anton, who has served on the committee for roughly non-consecutive three years, said. “We’re making a real effort to call for candidates.”

Based on a Reston Now analysis of RA elections data over the last four years, voter turnout is significantly higher when elections are contested.

The committee pushed hard to court candidates last year. For the first time, RA will host an open house with all 13 candidates who are vying for four open board seats this Sunday from noon to 2 p.m at The Lake House. The roster of candidates promises a contested race, unlike recent elections for the seat of the Hunter Mill District Supervisor and state Del. Ken Plum.

The impact of past strategies like mobile voting sites at apartments and community centers and postcard mailings has been “minimal,” Anton said. In 2015 and 2016, the elections committee received $54,4000 in reimbursement. The largest expense was a $51,000 services contract with Intelliscan, Inc, which tabulates election ballots and certifies results. 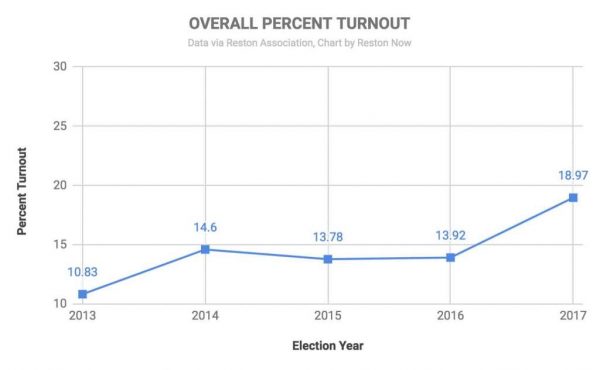 RA staff and volunteers will also distribute a flyer with voting information at Metro Stations, community centers, shops, restaurants, libraries and on cars. Posters on RA property and roadways will go up next week.

Still, limited election engagement is perplexing to some, and RA’s board has grappled with the issue in recent years. The question of whether or not the outcome of RA’s election represents the voice of RA members often elicits pause.

Causes of low turnout have not been studied. Anecdotal evidence suggests members more invested in the community or who have lived in Reston for several years tend to participate more, sources say. Nearly four percent of eligible renters of apartments voted last year, with residents who own property boasting higher turnout.

“Some people think it’s not going to make a difference. And that’s certainly not the case,” Anton said. “It is important to vote and it does matter. We’re doing everything we can to make people aware.”

Voting runs from March 5 through April 2. Paper ballots will be mailed on Monday. Electronic ballots can be accessed on RA’s website during the election period.