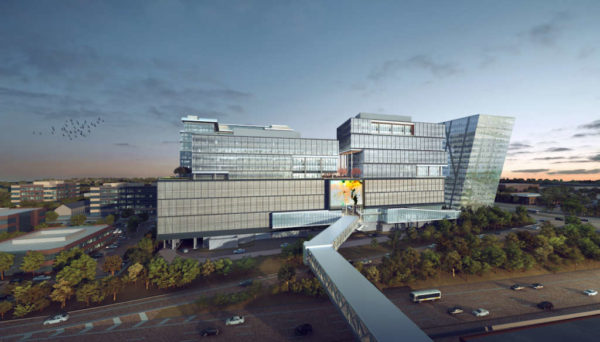 The building is designed by HKS Architects with steel and glass structures. The company’s portfolio includes the design of Urumqi International Airport in Xinjiang, China and the King Hussein Cancer Center in Amman, Jordan.

Office space will be restricted to six floors, which sit atop an eight-story, above-grave concrete parking deck. It will also include a private patio with a sky garden and gym.

Construction prompted Comstock to close four of eight kiosks on the plaza. According to Maggie Parker, vice president of communications and community outreach for Comstock, the kiosks were intentionally designed to be temporary. Some vendors will relocate into vacant kiosks.

“They’ve given many budding entrepreneurs an opportunity to test their business models and have added a lot of vitality to our emerging development,” Comstock wrote in a statement.