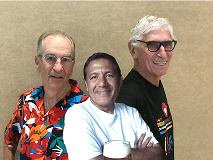 Three runners united by their common interests in running and art will display their work at Reston Community Center next week.

The exhibit, titled “Three Artistic Runners,” will run from Oct. 9 through Nov. 5. It features the watercolor, acrylic and crayon batik work of Jerry Lewis, Bob Lambert and Mohsen Alashmoni.

Lewis and Lambert are members of Reston Runners and have run together for more than 25 years. They have also participated in triathlons, exhibited their work at RCC open art shows, and taken art classes together over the past 15 years.

Alashmoni, who lives in Cairo and founded his own company, Maadi Runners, met Lewis at weekend running club meetings during running club events in Cairo, Egypt. Their friendship grew stronger as Lewis took part in Alashmoni’s company, which offers a platform for Egyptians and expatriates to train, social and travel to marathons.

Alashmoni and Lewis have run marathons together and had a month-long, two-man art show at RCC Hunters Woods called “Side by Side in Europe.