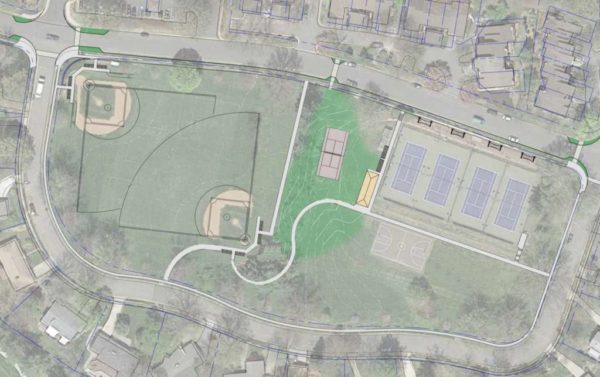 After a year-long review and public engagement period, members of a working group charged with developing the master plan for Hook Road Recreation Area will pitch their recommendations on how the area should be upgraded this week.

The area, which has remained largely unchanged since tennis and baseball amenities were added in 1973, was identified for major revitalization in 2016 after a review of facility enhancements approved by Reston Association’s Board of Directors.

Members of the 16-person working group, which was created by the board, will present their conceptual plan at RA’s board meeting at 6:30 p.m. at RA headquarters. The board will consider a motion to allocate $50,000 in next year’s budget for architecture and engineering of the conceptual master plan. Full cost estimates and phasing of future improvements would be determined following the analysis.

Design consultant Dewberry held three public roundtable discussions on the project — a process that flagged areas of concern, areas of use and areas to improve. Based on a public online survey and a survey mailed to households nearby the facility, Dewberry found that the areas were primarily used for “passive recreation,” with most respondents leaning toward using the park as is with minimal changes. After considering four concepts, the working group selected a final plan, which prioritizes traffic calming, baseball upgrades, internal paths, a ring path, and a natural playscape.

Road upgrades, which are subject to state approval, include roadway bump-outs at the west intersection of the property and a crosswalk. Upgrades to the baseball field and the construction of a permanent pavilion and bathroom is also recommended. Currently, one portable bathroom serves the entire park. Paths would be added near the baseball field. Other components of the plan include a natural enhancement for seating along Fairway Drive, tree preservation, a natural playscape for children with the “fewest manmade elements as possible,” and pathways as narrow as possible while remaining compliant with ADA and RA guidelines, according to the plan.

A live stream of the meeting will be available on YouTube.