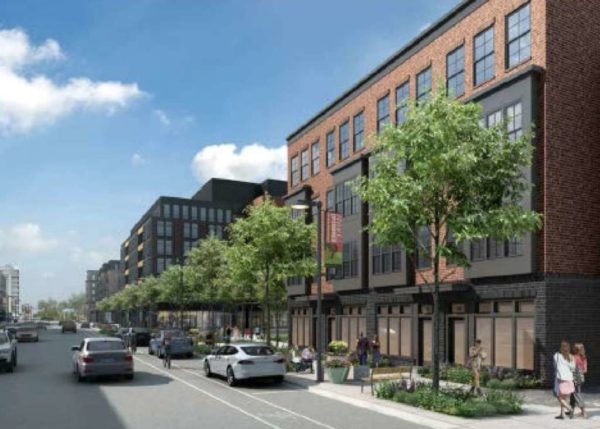 The approval sets the project, which would bring 1.8 million square feet of development across 17..5 acres east of Wiehle Avenue and south of Sunset Hills Road, in motion for a Board of Supervisors’ vote on Dec. 4.

John Carter, the Planning Commissioner for the Hunter Mill District, lauded the development team, JBG Smith, EYA and Chevy Chase Land Co., for bringing a diverse mix of low-rise housing to the area, a feature that he said is lacking in other projects recently approved in Reston.

Four blocks with several buildings are proposed on land that is currently used for low-rise office buildings and surface parking. The plan includes 127 independent units, a 33-bed assisted living facility, a 225-unit multi-family building and a mix of townhouses. A 14-story office building and retail is also planned on the site nearer to the Metro Station.

Carter said the mix of affordable and workforce housing units, which is integrated throughout the site, is not intended to serve as a precedent for other projects. Due to the variety of housing options proposed, the developer has integrated several affordable units in the townhouse area and the multi-family building, creating a dispersed mix of affordable housing throughout the project, Carter said. Parking will be offered at a cost reduced by 70 percent of the price for market-rate units. The affordability tiers are also 70, 80, and 100 percent of the area median income — a distribution lower than the typical county requirement of 80, 100 and 120 percent of the AMI. Independent living and affordable units will have shared access for several amenities.

Following concern about limited public amenities, the development team also added additional dog parks, playing areas for children, and agreed to work with area developers to install street lights, updated curbs, and signage along Reston Station Boulevard. That road will extend into the Midline project and pedestrian and bicyclist access to the Washington and Old Dominion Trail will also be provided.

The commission deferred a decision on Woodfield Acquisition’s plan to replace office buildings on Roland Clarke Place with residential units to Nov. 15 in order to allow the developer to devise a better way to create a grid of streets in the area.