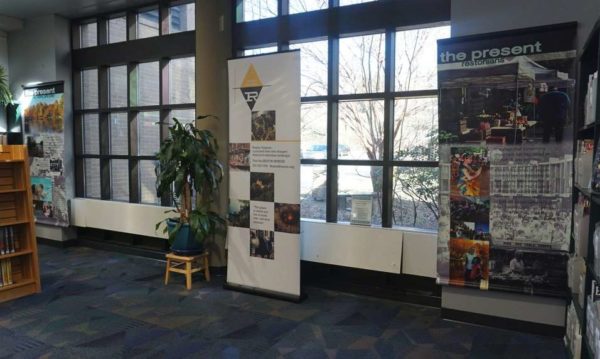 Two exhibits highlighting Reston’s changes and values since its founding in 1964 recently opened at the Reston Regional Library.

Alex Campbell, the executive director of the Reston Historic Trust and Museum, told Reston Now that the museum reached out to the library late last year to inquire about hosting some temporary exhibits in an effort to bring Retson’s history out of the museum and into the community.

The “Reston Then & Now” exhibit shows early pictures of Reston and aerial photography, including images of Lake Anne Plaza being built and how the same area looks today and the large barn that used to be at Hunters Woods Village. The “50/100” exhibit, which was created for Reston’s 50th and Founder Robert E. Simon Jr.’s 100th birthday, highlights Reston’s founding and how its principles are still implemented.

“Both exhibits tell the story of Reston — of the community’s growth and transformation but also, in many ways, of its continuity,” Ha Hoang, the assistant branch manager for the Reston Regional Library, told Reston Now.

The library started to receive positive feedback during the exhibits’ first week, Hoang said. “Those who have just moved to the area and out-of-town visitors have been especially delighted to see the exhibits in the library and to learn more about Reston,” Hoang added.

Both Campbell and Hoan said that collaboration makes perfect sense.

“In many ways, our missions are very similar — we’re both community anchors and learning hot spots whose goals are to help our constituents stay informed, connected and engaged,” Hoang said.

The exhibits opened on Feb. 26 and will be on display until the end of April at 11925 Bowman Towne Drive.

The exhibits will then get replaced by others from the Reston Museum, Hoang said.