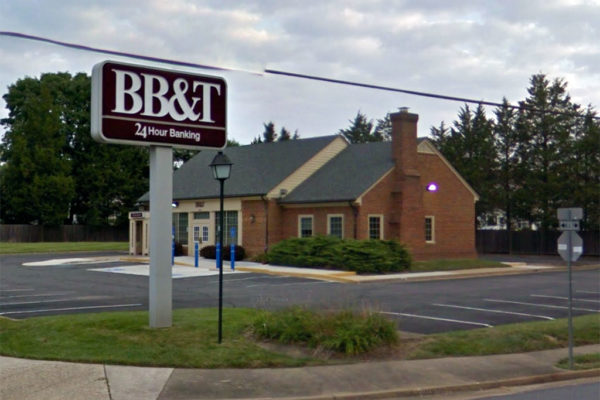 Updated at 3:30 p.m. on March 13 — Police said a man entered the bank at 1:14 p.m., implied he had a gun and demanded money. He was given cash before leaving the bank on foot, according to the police report. Police also added a height range to the description of the suspect, saying that the man was “5’6″-5’7″ tall.”

Earlier: Just weeks after a robbery in late February, police are back at the BB&T Bank at 2513 Fox Mill Road in Reston investigating another robbery.

Police officers were on the scene at 2 p.m. today (March 12), the Fairfax County Police Department tweeted.

FCPD described the suspect as a “Middle Eastern man wearing black hat and black clothing,” adding that he left in a vehicle that was possibly a silver SUV or minivan.

People are advised to avoid the area.

The same bank was robbed on Feb. 21, according to police. Police are asking the public to help identify the suspect in that robbery, who was described as “light-skinned, 20 to 30 years old, 5’8″ tall, thin build, wearing a dark gray shirt, light-colored jacket and a gray cap,” according to a police report.