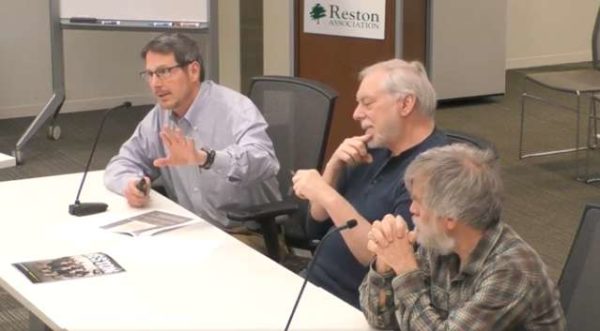 After a year-long hiatus, the Reston Association’s Pedestrian Lighting Working Group made a comeback at the Design Review Board’s meeting last night (March 19).

Hunter Mill District Supervisor Cathy Hudgins’ recent call for more streetlights around Reston and some criticism of the lighting at the Sekas development along Sunrise Valley Drive renewed the focus on the lighting, Butler said.

“Lighting is going to be at the forefront for some time to come,” Butler said.

Butler said that the working group is also adopting some guidelines from the Reston Annual State of the Environment Report (RASER).

Burton showed the Design Review Board the Reston lighting map that was created by overlaying existing pathway lights on a new land use map. Burton said that the working group members walked or biked Reston pathways and corridors to note areas of no, low, medium or high lighting.

The map has four main zones:

In addition to marking the traditional RA pathways, the map also notes travel corridors along certain roads that bicyclists and pedestrians might frequently use. 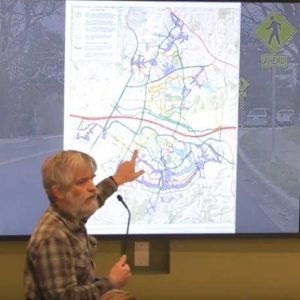 The map is meant to serve as a template for the Design Review Board’s review of lighting requests, he said.

Identifying areas that need more lighting is just one step.

“We want to do it right,” Butler said, mentioning LED lights on timers.

Landers added that the technological advances in LED lights provide more options for dimmer or brighter lighting, along with being more energy-efficient.

Vice Chair and Architect Member W. Neal Roseberry praised the three working group members for their effort, which has broad appeal to Restonians. “I think this is really pretty common sense,” he said.

While the Design Review Board supported the map and expressed a desire in making a future action item around lighting, Richard Newlon, the board’s chairman, questioned how much detail should get decided around lighting while still creating an enforceable guideline.

In addition to the progress report, Butler also gave the board a preview on other actions the working group is taking.

“We’re working with Fairfax County to get an interpretation on that proffer as to whether or not that money can be joined with our project, our current funding so that we can do lighting down there, because we don’t have enough money to do the whole project,” Butler said.

Butler said that he expects the working group to come back to the Design Review Board in April or May with information on the $81,300 promised in the proffer.

“The face of Reston is changing,” Butler said. “We want to make sure the lighting keeps up.”