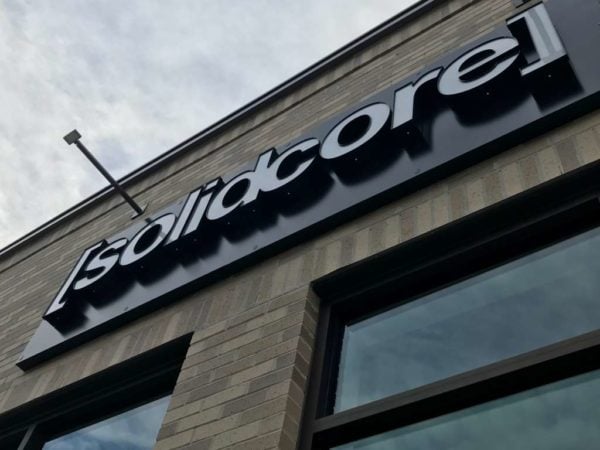 RTC West welcomed the D.C.-based fitness chain Solidcore back in early March as part of a larger expansion in the D.C. area.

After one month in business at its new spot at 12100 Sunset Hills Blvd, Krystal Capasso, the studio manager for the Reston location, shared some details with Reston Now on how the pilates-focused fitness chain is faring in Reston.

Before coming to Solidcore, Capasso worked at pilates and barre studios in Arlington and Ashburn. She also served in the Marines for several years.

Reston Now: How has it been going since opening?

Krystal Capasso: We’ve had a lot of people come in. It’s a cool mix of people.

RN: Do you know why the Reston location was chosen?

KC: Not really, but I can tell you we are right next to Reston Town Center and then there are also some businesses right nearby.

RN: What is your customer base like at Reston?

KC: We’ve had a lot of people coming during lunch or right before or after work and also people who live nearby — Reston, Herndon and Fairfax. It’s more of a mix of people who are coming from work or who live in the area. I think we have a fair amount of men and women coming into the studio.

RN: What do you think is the appeal of the Reston location?

KC: The [D.C.-area] people are already familiar with Solidcore. This location may be more convenient for them than other studios in Northern Virginia — filing gaps between studios. I think also generally as a workout, the cool thing about Solidcore — it’s a workout that they can use as their primary workout, but it’s also a really good complimentary workout to something else that people are doing. It’s a good way to reach other people, people who are already fit and have a routine in place but want some diversity and change.

RN: Generally, do people who go to studios to work out stick to the same spot or do they frequent multiple ones?

KC: Usually, people come to a studio and stay there and only go to those studios. I think a unique thing about Solidcore is we do have people who do that exclusively, but then people who will use Solidcore as another thing to do to supplement their workouts.

RN: What do you enjoy the most about Solidcore?

KC: When I come into this studio and take a Solidcore class, I am always challenged. It doesn’t get easier. You are always going to get stronger.

RN: What do you think makes people return for more classes?

KC: The community keeps people coming back. We try to get people excited about working out together. It’s a really team-oriented environment.

For people who might be hesitant about trying out Solidcore, Capasso said at the end of the interview that there is a beginner’s class that moves at a slower pace to allow coaches to give more instructions and to demo moves before class starts so that people can feel more comfortable.