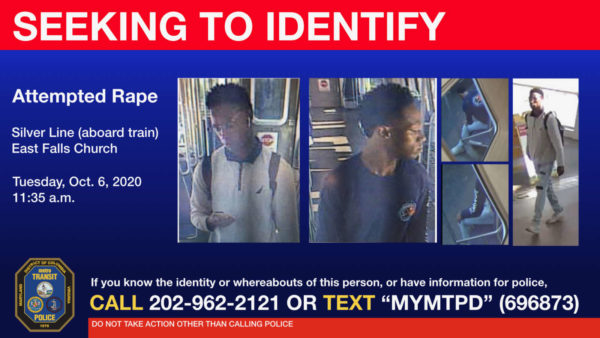 Police are asking the public’s help in identifying a man they believe attempted to rape a woman on a train at the Wiehle-Reston East Metro Station.

After boarding at Wiehle-Reston East Metro Station, the suspect allegedly assaulted the woman, attempted to remove her clothing and exposed himself.

The victim, who was with her young child, escaped the train at East Falls Church Station where Metro Transit Police responded. The suspect appears to have exited the system at Foggy Bottom Metro Station.

He was last seen wearing a dark shirt with the words “Piranha Joe” on the left sleeve and a logo of a circle and a fish on the back and left breast areas of his shirt.

Anyone with information about this incident or the person of interest shown is urged to contact Metro Transit Police detectives by calling (301) 955-5000. Tips may also be sent via text message to “MyMTPD” (696873).