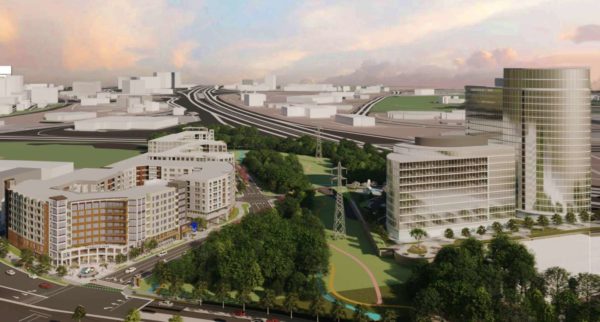 The Herndon Town Council is considering proposed exceptions for a mixed-use development at Fairbrook Park, which were presented to the council earlier this week.

The council heard proposed exceptions on behalf of Quadrangle Development Corporation for its plans of a mixed-use development at the intersection of Herndon Parkway and Fairbrook Drive.

The company is planning four buildings with 1.5 million square feet of development on the nearly 28-acre site. The planning consists of two office buildings east of Herndon Parkway, north of the Dulles Toll Road and south of Fairbrook Drive. A third building meant for mixed-use abuts Herndon Parkway north of Fairbrook Drive. The final building will be primarily residential, with a parking structure incorporated into it.

The council heard a pair of proposals from Zoning Administrator David Stromberg that would allow for exceptions at the site. The first proposal allows for an encroachment on the 100-foot buffer of the Resource Protection Area (RPA) component of the Chesapeake Bay Protection Area, and the other allows for development in the floodplain overlay.

Stromberg detailed in his presentation two primary boundaries in the flood zone that will be affected by the exception to the floodplain overlay (FPO). The proposal calls for installing two box culverts underneath a private road that would connect Fairbrook Drive to the office buildings. The second change calls for Fairbrook Drive to be built up slightly and grading going down into the flood zone. 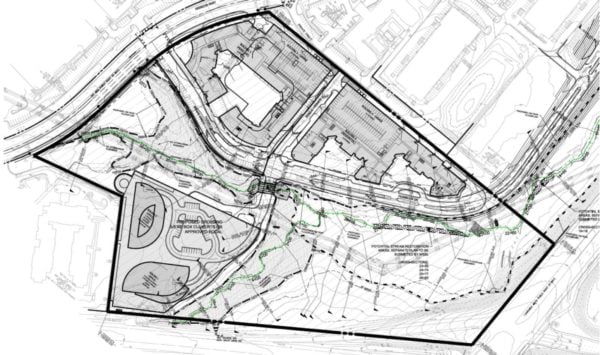 Further conditions on the proposal include the dedication of a floodplain easement and accommodating design requirements of a sanitary sewer metering station, according to Stromberg. Another condition requires Quadrangle to perform hydraulic and hydrodynamic studies that conform to the most current FEMA maps.

The second request into the buffer of the RPA proposes an exception for 0.77 acres (33,552 square feet), with 0.42 acres (18,315 square feet) for new impervious surfaces that water cannot pass through. The area will consist of the private drive that connects Fairbrook Drive to the two office buildings, the private frontage of the mixed-use building, and the private frontage and turnaround area for the residential building.

New encroachment at the two office buildings is being requested because of a new reoriented private drive. It will include the private drive and the two box culverts that are being called for in the first exception request.

Some on-site mitigation and potential off-site mitigation will be required with this exception. On-site will include new native plantings as well as stream restoration to stabilize the banks and slow down the water.

In response to council member Signe Friedrichs’ questions about potential damage to Sugarland Run with the introduction of the culverts, Stromberg assured the council that considerations had been made to preserve or improve the stream’s condition.

“That’s why you have this RPA exception process; it requires developers to go through this extra level of review to make sure they’re proposing a plan that will result in pollutant removal that’s either the same as existing conditions or better,” Stromberg said.

“Based on the plans [Quadrangle] submitted, it will result in better conditions than what’s currently out there now.”

The council will consider both proposals at its Nov. 17 public session.

Images via Town of Herndon