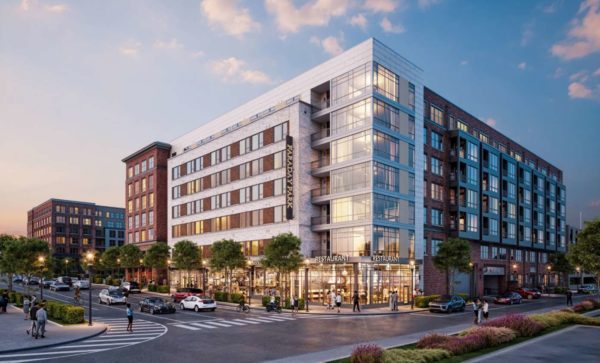 The first apartment tower at Faraday Park, a new apartment neighborhood, is set for completion in March.

Developed by Rooney Partners and Bozzuto, the project will house roughly 400 residential units near the Wiehle-Reston East Metro Station. The apartments are located at 11201 Reston Station Boulevard.

Chris Oursler, the director of construction and development for Rooney Properties, says the project was built to fulfill the needs of the community.

“We’re thrilled to be a part of the growing community here in Reston,” Oursler wrote in a statement.

Rents for units, which include studios and three-bedroom apartments, range from 1,605 to 4,032, according to the company’s website.

Once completely built out, Faraday Park will include a maker’s workshop area, photo booth, fitness center, commercial kitchen, pet spa, cowering areas, and several lounges. A rooftop pool with cabanas and grill stations are also planned for the site, which was designed by DC-based architecture firm MV+A.

Faraday West, which is closest to the Metro station, contains 242 apartments with around 10,000 square feet of retail at the corner of Reston Station Boulevard and Michael Faraday Drive. Faraday East, which replaced surface parking, has 166 modern apartments. Both buildings are flanked by four-story townhouses.

The second tower on the site is set to be completed in May. Pre-leasing has begun.