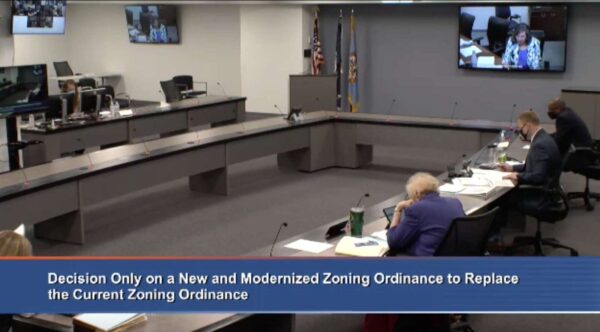 The Fairfax County Board of Supervisors voted yesterday (Tuesday) to approve changes to the county’s zoning ordinance intended to make the codes easier to navigate and understand.

The 7-3 vote — with Supervisors Walter Alcorn, Daniel Storck, and Pat Herrity dissenting — serves as the culmination of a four-year Zoning Ordinance Modernization Project, or zMOD, that began in 2017 to update zoning laws codified in 1978.

Although the updates to the document were sweeping in scope, three proposed changes drew a great deal of public attention and comment. These included proposals to loosen restrictions on accessory living units and home-based businesses and revise size and height regulations for flags and flag poles.

“There are…very few issues receiving much attention,” Dranesville District Supervisor John Foust said. “I believe that demonstrates that, given everything that we’ve done, it was a fair and transparent process.”

Storck, who represents the Mount Vernon District, said he supports many aspects of the 614-page draft, but a few areas surrounding the accessory living units and the home-based businesses, including the permit process and enforcement, give him pause.

He worries that some of the proposed changes to require only administrative permits could lead to a lack of engagement and that enforcement, which he calls “the bread and butter of public confidence,” is not going to be swift or strong enough to stop zoning violations.

Approved changes to the regulations for accessory living units include allowing interior units with an administrative permit and removing the requirement that only those 55 and older or disabled people can live in them. However, the owner must live in the main home, can only operate one ALU in which up to two people can reside, and must provide a parking spot.

To operate a home-based business, people will need to get special exception permits to have customers visit between 8 a.m. and 9 p.m., unless they provide instruction to fewer than eight students a day and up to four at a time.

Acceptable businesses include retail — as long as sales and delivery occur online or offsite — as well as exercise classes, repair services for small household items, hair salons, and clothing tailors. People can also operate an office or as a music, photography, or art studio out of their home.

Residents can have up to three flags, and flag poles can be up to 25 feet tall when in front of a single-family home or up to 60 feet tall on other lots. Property owners can apply for a special permit to extend the height of a pole.

The board opted not to adopt any regulations limiting the size of flags.

In voting for the final draft of the plan, Providence District Supervisor Dalia Palchik said the document represents a compromise that goes “further than some would like to go, but not as far as others would like.”

The supervisors highlighted the Herculean effort that went into overhauling codes for a county as large as Fairfax and taking into account community input. Foust said that the most recent draft, which was subject to a public hearing on March 9, “includes revisions that significantly improve the initial package that we considered.”

Board of Supervisors Vice Chair Penelope Gross said that home-based businesses and accessory living units are both “already here,” so the changes help clarify what is allowed and set guardrails to preserve neighborhoods and allow people to work from home.

“I know there’s a lot of speculation about what will happen. Speculation is usually just that: speculation,” she said. “It sometimes is fear.”

Palchik said she does not discount the people who expressed legitimate concerns, but she argued that many of those have been addressed during the zMOD process. She aargued that many of the changes are similar to, if not “much more modest” than policies that are already in place elsewhere in the D.C. area, including in Montgomery County, D.C., Arlington, Loudoun County, and the City of Alexandria.

“While there are many changes to the zoning ordinance, I do believe it’s critical in seeing that our housing market is under pressure and costs of living continue to rise, especially for those who struggle to live here,” she said. “While accessory living units do not fix all of these problems, the added flexibility for our most vulnerable residents and additional options for those who want to remain in their homes can be part of the solution.”