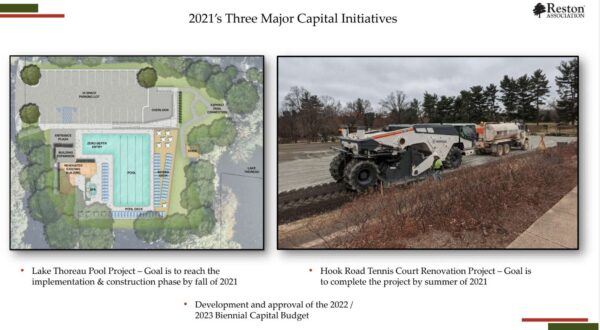 However, a number of much-needed capital projects remain, and RA CEO Hank Lynch says the ability to fund them is “primarily my biggest concern” for the next five to 10 years.

Despite delays and shortages related to the ongoing COVID-19 pandemic, Reston Association managed to finish 85 of its 121 ongoing capital projects this past year — 70% completion rate.

There are 13 active projects, and 28 projects will be completed this coming year, according to the map available on RA’s website.

Lynch specifically cited the Hook Road tennis court renovations and the Lake Thoreau Pool project, which is expected to enter the construction phase in the fall, as “taking up a significant amount of capital work.”

$3.8 million was spent on all projects this past year, and $3.6 million is being budgeted for this coming year, Bitzer said.

Back in March 2020, a newly re-established recreational board facilities working group determined that a number of decades-old facilities were still in need of work.

“We have aging amenities…About half of [the swimming pools] are more than 30 years old,” Lynch said. “As we look to the next five to 10 years, five of these pools will require major renovations.”

Lynch noted that these renovations will take multiple years and require multi-million-dollar commitments.

However, RA’s budget for taking on these big projects is lacking, and the association may need to make some hard decisions going forward.

“Our assessments have really not kept pace with our anticipated long-term spending demands that we now found ourselves facing,” Lynch said. “We are really going to have some tough choices to make when it comes to some of these larger price-tag items.”

According to the presentation at the annual meeting, a huge chunk of members’ $708 annual assessment already goes towards maintaining and improving facilities as well as providing recreation services.

58.5% of the annual assessment dues goes towards these three categories. That’s about $414 annually per member.

RA members suggested some other ways to raise revenue, such as re-starting boat and Lake House facility rentals, particularly with weddings and other big events potentially returning this coming year.

But officials made it clear that the biggest potential source of much-needed revenue would be to raise annual assessment rates again. Rates went up each of the past two years, though there was a decrease in 2017.

How to fund capital projects will be one of the top issues that RA’s new board of directors and president Caren Anton will have to address in the coming year.

“Keeping our assets and facilities in top condition remains a top priority for the board,” Bitzer said.