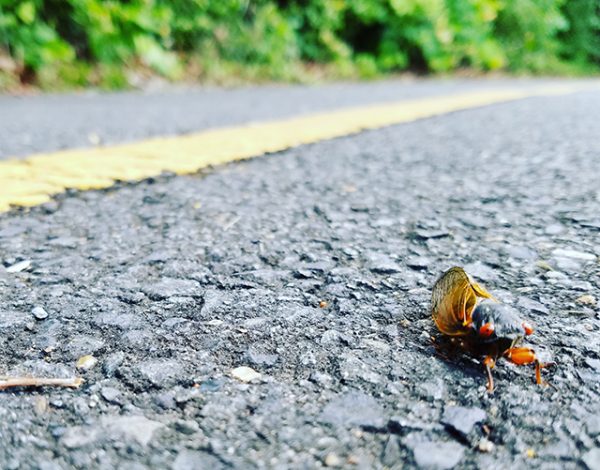 The cicadas are about to take over the world, or at least much of the East Coast, including Fairfax County.

After biding their time for the past 17 years, Brood X could start emerging in full force as soon as today (Monday), according to the first-ever cicada forecast by The Washington Post’s Capital Weather Gang.

From animals digging for a snack to holes in the earth made by cicada nymphs burrowing up from their underground lairs, signs of the insects’ impending arrival have become more plentiful in recent weeks. In fact, a few bugs have already been spotted, summoned out of their exoskeletons early by the rapidly warming weather.

The prospect of millions of winged insects crawling out of the ground might convince some people to stay inside until July, but as Fairfax County Park Authority naturalist and education and outreach manager Tammy Schwab told Reston Now in March, cicadas are harmless — even edible.

In addition, while some annual cicadas pop up every year, the once-every-other-decade appearances of the periodical variety are natural phenomena unique to the U.S., a product of the creatures’ unusually long life cycles.

Fairfax County has been doing its part to turn anxiety over Brood X into excitement, inviting community members to a game of Cicada Stroll Bingo and highlighting the environmental benefits of cicadas.

How are you planning to greet Brood X? Are you ready to embrace the swarm, or does the idea of stepping outside in the next two months fill you with dread?