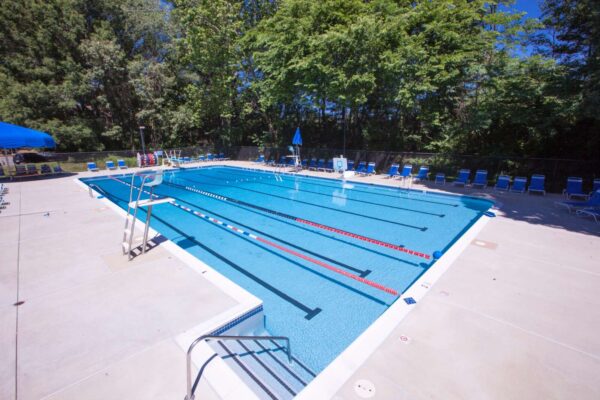 (Updated at 2:30 p.m. on 5/19/2021) Reston Association staff is recommending that four pools be “seriously considered for repurposing” due to low usage.

Pool usage will be discussed at a joint work session with the RA board and Recreation Facilities Working Group on Thursday (May 20), along with budgetary recommendations based on findings that the working group presented in late February.

Two decades of data that RA CEO Hank Lynch will present at the work session show that Golf Course Island, Newbridge, Tall Oaks, and Shadowood pools all have lower usage compared to RA’s 11 other pools.

As a result, staff recommends that RA consider “repurposing” the facilities. Tall Oaks and Shadowood are both currently closed for ongoing capital improvement projects.

With pools now open for the 2021 season, the staff recommendations come on the heels of a year-long evaluation by the recreation facilities work group that found a number of decades-old facilities are in need of work and repairs.

The group noted in its report that funding for these capital projects may not be sustainable without a significant increase in members’ annual assessment.

Over the next decade, RA is scheduled to spend about $40 million to operate, maintain, and address capital improvement needs on its 15 pools and more than 50 tennis courts, according to Thursday’s work session presentation.

When asked to comment about what could happen to these specific pools, RA spokesperson Mike Leone told Reston Now in an email that their fate has yet to be determined:

The Facility Working Group’s work session is simply the start of the process. During the work session participants will review the Recreation & Facilities Working Group findings and recommendations on RA’s recreation facilities and the long term operational, maintenance and capital costs for such facilities. ‘Repurposing’ of some facilities may be a consideration and any decision to do so down the road, will require significant community input and discussion, involve RA’s Parks & Recreation Advisory Committee and would be the decision of the Board of Directors.

When asked if “repurposing” could mean the potential closing of those pools, Leone demurred.

“‘Repurposing’ could mean reimaging the space for a different type of amenity or use of interest to members,'” he wrote.

In general, pool usage has dropped by about 37% over the last decade, according to the work group’s data. Every pool except for Dogwood and Glade has seen a decrease in usage since 2010.

The four pools that have seen the least frequent usage as of 2019, Golf Course Island, Newbridge, Tall Oaks, and Shadowood were all built between 1969 and 1976, making them three to four decades old. It has cost about $9.6 million in total to maintain and operate them over the last 10 years.

In total, RA has spent about $33 million on pool maintenance and operations since 2010.

Budgetary concerns and lower usage aside, a number of community members told Reston Now that they want those four pools to remain open, saying they value their neighborhood pools and believe that recent usage statistics alone do not tell the full story.

Golf Course Square Cluster Association President Elmer Reinhardt says that 400 units would be affected by the repurposing or closing of the Newbridge pool.

“Newbridge pool is the only pool in Reston that you don’t have to cross a through-street to get to it,” he said. “The children can walk to that pool without ever crossing a highway, and we think that’s important.”

A resident of the community for more than 40 years, Reinhardt says he believes the recent lower usage has more to do with the population being cyclical.

“We’re seeing a huge influx of young families into our neighborhoods now and those are the ones that use the pools,” he said.

He argues that it would be shortsighted to make a decision to repurpose or close certain pools based just on recent data.

“[The demographics] change every 10 to 15 years. One year, you’ll only see wheelchairs being pushed on the sidewalks and, the next, only strollers,” he said.

RA has recently renovated several of their pools, including an ongoing and much-discussed $3.5 million facelift for Lake Thoreau. This spring, Glade pool’s slide was resurfaced, and new lighting was added.

The presentation suggests that a “seasonal indoor racket sports facility should be considered,” along with amenities sought by new RA members.

Currently, a conversation about pools is currently not on the agenda for the RA Board of Directors meeting on May 27, Leone confirms.

However, there remains a possibility that it could be added to the agenda prior to the meeting, and members can discuss it during the meeting’s comment period if they wish.