Café Montmartre and Kalypso’s Sports Tavern joined other restaurants around the world in setting aside tables over Labor Day weekend (Sept. 4-5) for the men and women, ages 20-31, who were killed during the U.S. withdrawal from Afghanistan.

“Both of us decided to do this at the same time in order to allow the many visitors to our plaza to take a moment to reflect on the loss and remember the sacrifices made to help others,” Kalypso’s owner Vicky Hadjikyriakou said, noting that she collaborated with Café Montmartre owner Anh Lee.

The Aug. 26 suicide attack at Hamid Karzai International Airport came amid an urgent evacuation effort after the Taliban seized power and U.S. troops started to leave, ending the country’s 20-year military presence in Afghanistan on Aug. 30.

A regional offshoot for the Islamic State claimed responsibility for two bombings, which occurred at an exterior gate of the airport and a hotel.

Flag-draped transfer cases line the inside of a C-17 Globemaster II Aug. 29, 2021, prior to a dignified transfer at Dover Air Force Base, Delaware. The fallen service members died while supporting non-combat operations in Kabul.

Café Montmartre and Kalypso’s decorated the tables that they set aside with small American flags. Kalypso’s placed them in cups of beer along with a sign that said “Reserved for the 13 fallen HEROES.”

“Both of our families emigrated to the United States within the last 50-60 years, with Anh’s family leaving Vietnam in much the same circumstances as those in Afghanistan, so doing this was especially meaningful,” Hadjikyriakou said.

The tables were kept indoors or outdoors all day and evening throughout the holiday weekend. People could also sign their names, give condolences, and share messages that the two restaurants plan to send to the victims’ families through the nonprofit United Service Organizations.

Other businesses across the country and globe have made similar memorials.

“Anh and I wanted to honor those who gave their lives for others, but weren’t quite sure of the best way to do it,” Hadjikyriakou said. “We saw that other establishments had ‘Tables of Honor’ and we decided we would join the hundreds of restaurants across the country ensuring that these men and women were not forgotten over the holiday weekend.”

(Updated at 3:25 p.m.) After going virtual in 2020 and facing a budget battle this spring, Friday Night Live! supporters will have to wait one more week to get their live music fix.

The organizing committee behind the annual Herndon summer concert series announced in an email sent to supporters at 2:14 p.m. that tonight’s Under the Covers concert, which was scheduled to kick off Friday Night Live’s 27th season, has been canceled.

In an email sent out just before noon today (Friday), the committee says it was recently made aware that the scheduled concert would be taking place at the same time as a memorial service for the three individuals who were murdered at the Parkridge Gardens apartment complex on June 19.

“Out of respect for the grieving family and their memorial service, we are going to lower and carefully monitor our music volume and speaker positioning this evening,” the committee said in the earlier email. “In addition, we have decided that all tips collected tonight will be directed to the family and survivors.”

However, the Town of Herndon informed the committee “just minutes ago” that the Friday Night Live concert will not go forward as planned.

Here is the full statement from the FNL committee:

We are very sad to share that the Town of Herndon informed us just minutes ago that we cannot hold tonight’s event. We worked very hard over the past 48 hours to find a solution where both events could occur and included a plan to help raise funds for the victim’s family.

We apologize to all our partners (band, sound company, beer supplier, and restaurants) who have worked hard to prepare for tonight including hiring staff, loading trucks, and preparing food. Also to our fans who have made plans to be together with us tonight. Hopefully many of you will instead go to some of our downtown restaurants.

We will work hard to try to make sure that next week’s show featuring Turtle Recall goes on as planned.

We hope everyone has a safe and happy Fourth of July weekend.

The Town of Herndon says in a statement that it decided to cancel the Friday Night Live concert due to limited parking and public safety resources:

The Town of Herndon has made the difficult decision to cancel Friday Night Live for tonight, July 2, 2021. This was not an easy decision to make, however, a funeral for three of our beloved community members who lost their lives through a horrific tragedy is being held in the downtown area at the same time. Due to tremendous community interest and support for the family while they grieve and heal, many resources downtown could become overextended, to include available parking and public safety resources. Please understand that this decision was made with the best interest and safety of our community in mind.

Friday Night Live! will instead kick off on July 9 with Turtle Recall. The concert series will run through Sept. 24. 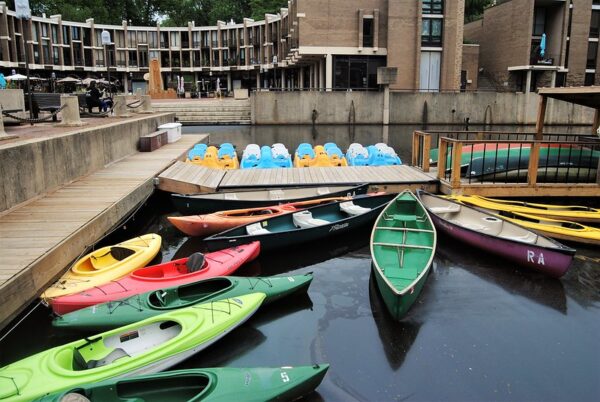 County Board Discusses Impact of Telework on Hiring — “After companies in the county have spent more than a year with much of their workforces teleworking — and with county office vacancy rates hovering at 14.6% in 2020, the highest rate in two years — Fairfax Board Chairman Jeffrey McKay asked the Fairfax County EDA whether the number of tech vacancies could lead companies to pivot to recruiting remote workers and what the ripple effects would be.” [Washington Business Journal] 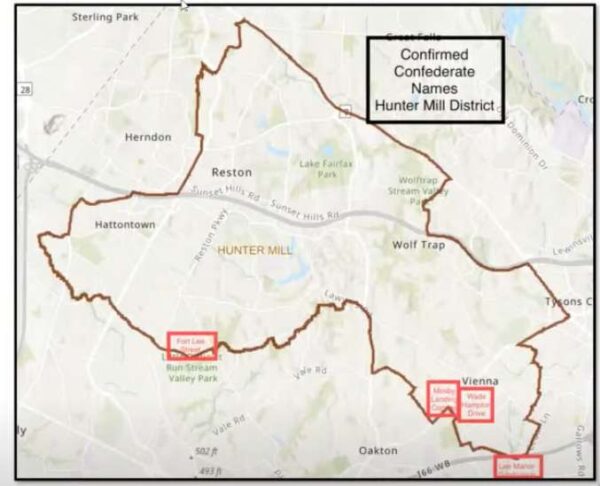 The discussion was based on the Fairfax County History Commission’s 539-page inventory, which was first released in December and details the history and context of each place named after a prominent Confederate figure.

The project traces its roots to last summer, when the Fairfax County Board of Supervisors directed the commission to study the legal and financial implications of possible name changes throughout the county.

The commission determined that, out of about 26,500 total named places in the county, approximately 157 streets, parks, monuments, subdivisions, and public places in Fairfax County bear names with ties to the Confederacy.

In addition to cataloging sites, the report provides appropriate context, history, and narrative for possible name change discussions, including a dive into “Lost Cause” ideology, its pervasiveness in Fairfax County, and how it influenced the naming of places.

The Lost Cause ideology encompasses myths used to rationalize Confederacy sympathy, mainly that the Civil War was not fought over slavery, the pre-war Southern way of life is to be celebrated, and that prominent figures like Confederate Gen. Robert E. Lee didn’t believe in slavery.

“There was an urging by some to exclude it from the report altogether or soften its tone,” Naef said. “These reactions prove the point. The perspective of the Lost Cause has been embraced by generations.”

In its report, the History Commission recommended making the inventory available to the public via the Fairfax County Public Library, which is currently the case, and using the report as a guide for “a robust public process for considering future actions.”

The Hunter Mill District town hall is one of the first steps in that process, members of the commission at the meeting noted.

Within the Hunter Mill District, there are believed to be four places named after Confederates: Fort Lee Street, Lee Manor, the Mosby’s Landing condominium complex, and Wade Hampton Drive.

Fort Lee Street in Herndon and Lee Manor along Lee Highway near Vienna both derive their names from Robert E. Lee.

Fort Lee Street was named in the mid-1970s when Fox Mill Inc. developed the Folkstone subdivision, while Lee Manor is directly tied to Lee Highway, which is in the process of being renamed.

The Virginia General Assembly passed a bill in February, allowing Arlington to rename their portion of Lee Highway.

Mosby’s Landing in Vienna takes its name from John Mosby, a Confederate commander who was also known as the “Gray Ghost.” The condo complex was built on the site where legend says that Mosby and his horse hid out from Union soldiers.

Vienna’s Wade Hampton Drive is named after a Confederate lieutenant general who reportedly led a unit of 600 men and horses down the road in 1865. After the war, Hampton criticized Reconstruction and worked to suppress the vote among South Carolina’s Black population when he became governor of the state.

According to the history commission, the Town of Vienna named the street after Hampton in recognition of the Civil War’s 100th anniversary. The town is currently in the process of having the road’s name changed.

While the Commission’s charge was to examine places named after Confederates, several residents suggested that places named after individuals involved in the “Mass Resistance” movement opposing school integration should also be re-examined.

Examples include former Fairfax County Public Schools Superintendent W.T. Woodson, who opposed desegregation and still has a high school bearing his name, though schools were overall not included in the history commission’s inventory.

For years, the library at Lake Anne Plaza in Reston was named after Glass. Today, that building is now the Reston Museum.

On Saturday, a memorial service will be held for Scott Fricker, 48, and Buckley Kuhn-Fricker, 43, the Reston couple who were shot and killed in their own home last week.

The service will begin at 10 a.m. at Herndon’s Trinity Presbyterian Church.

The couple was shot in their home on Friday, Dec. 22. Police believe a 17-year-old Lorton boy, whose identity has not been released, shot the couple and turned the gun on himself. He remains in the hospital with life threatening injuries.

One family member believes the teenage boyfriend of the couple’s daughter killed them after they learned of his Nazi views and encouraged their daughter to break up with him. The shooting took place on the 2600 block of Black Fir Court.

Fricker had a Ph.D from the University of Maryland and worked for the Bureau of Labor Statistics. Kuhn-Fricker specialized in estate planning and elder law.