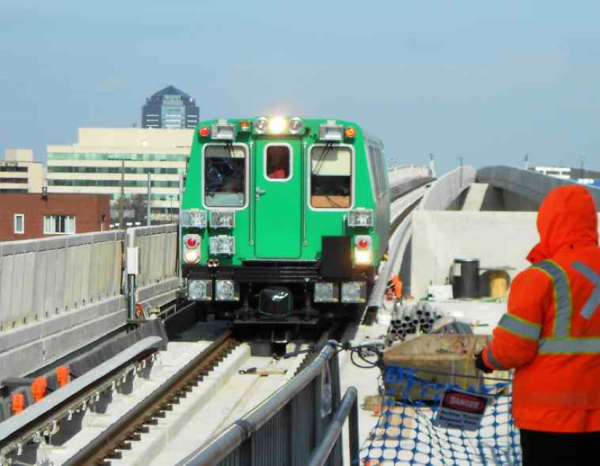 As expected, the contractor building Metro’s Silver Line submitted the project for approval on Wednesday, avoiding a deadline in which fines of $25,000 a day were about to begin, Metropolitan Washington Airports Authority officials confirmed.

Dulles Transit Partners, part of Reston-based Bechtel Corporation, said it has reached “substantial completion” on the $2.7 billion Phase 1 of the project, which will bring rail from East Falls Church to Reston’s Wiehle Avenue.

“We are very pleased with the progress and moving the Silver Line one step closer to full operation,” Bechtel officials said in a statement on Tuesday.

Dulles Transit Partners originally said on Feb. 7 that it had reached the substantial completion mark. Substantial completion is the point at which they feel their job is done and ready to be turned over to Metro. Metro would then have a 90-day period to conduct its own testing.

However, part of the handoff involves Metropolitan Washington Airports Authority (MWAA) conducting its own two-week review, and in late February MWAA  found issues in 7 of 12 areas, ranging from leaks to problems with the automatic train control system. It was revealed at a recent MWAA Board meeting that speakers in all five stations have to be reinstalled, and there is a cable issue in the Tysons tunnel.

DTP says those issues have been fixed. MWAA will now conduct another two-week review process. If the project is deemed ready to go, the rail could open in June or July.

“We are that much closer to leaving the train station,” Rep. Gerry Connolly said at an appearance in Reston. “It will be operational, we hope, by July.”

According to DTP’s contract, if the work is not finished starting April 10, DTP faces a $25,000-a-day penalty until the work is done.  If the project is not completed 92 days after that April date, the contractor would have to pay roughly $2.3 million in fines, plus an additional $75,000 a day.

Ultimately, if the project is delayed more than six months from that April date, DTP could be required to pay more than $9 million total. Under the terms of the contract, the payments are capped at $60 million.

Former Congressman Tom Davis, a MWAA board member said recently that the most important thing is that the rail line is 100-percent safe and ready to go before opening.

“Hopefully, we can meet the April 9 deadline and it will be acceptable and we could move on,” Davis said. “But we want the public to know that when this transit system opens, it is going to be Grade A reader for business. It is going to be safe and it is going to work efficiently.”

While a opening date for the Silver Line was never set, officials had hoped to finish testing last September for a possible December opening. But delays were announced last summer, then in November when the tracking system issues were discovered.

After the March setback, officials are no longer estimated when the turnover may be as DTP works to correct the problems. However, a source told WTOP last week that the Silver Line may open by July 4.

This story will be updated with further reaction from MWAA.