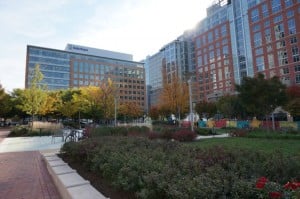 All 2.1 million square feet of office space at Reston Town Center is leased, with more being planned to accommodate prospective tenants. And with Metro’s Silver Line slated to open this summer, business around here is going to transform, Rep. Gerry Connolly said.

That was the takeaway from the Greater Reston Chamber of Commerce’s annual Virtual Realty Tour at the Hyatt Regency Reston on Wednesday. The event brings together local developers and commercial real estate representatives for a look at what’s happening in the Dulles corridor.

“You look at Clarendon-Ballston,” Connolly (D-Va. 11th)  said of the transit-oriented Arlington business hub. “That is three-miles long. The Dulles corridor is 23 miles long. When we are finished it is going to be a hub of employment.”

But that has an impact on the rest of the county, where there is 18 million square feet of vacant space, said Gordon. Businesses want to be on the Silver Line, which will have five stops from Tysons to Reston when Phase 1 opens.

“All laws of supply-and-demand have been suspended for the next few years,” said Gordon. “Businesses want to be on the Metro line. Tysons/Reston are healthy and drive the economy of the rest of the county.”

Pete Otteni, Vice President of Development for Boston Properties, which owns most of the space at town center, gave an update on what’s happening there:

Photo: The Avant and office buildings at Reston Town Center