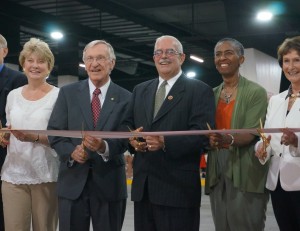 Metro’s Silver Line opens to to the public Saturday at noon, when the first train leaves Wiehle-Reston East.

Prior to the start of service, local leaders who helped make rail to Reston happen — a 50-year or 20-year process, depending on how you are counting — will hold an opening ceremony.

Many of the officials were on hand last Saturday, as Fairfax County hosted a ribbon cutting and open house for the 2,300-space public parking garage at Reston Station, adjacent to Wiehle-Reston East.

Wiehle-Reston East will be the end of the line for at least five years, when Phase 2 of the Silver Line is expected to be completed. Phase 2 will take passenger to points west of Wiehle-Reston East such as Reston Parkway, Herndon, Dulles International Airport and Ashburn.

The 10 a.m. ceremony is closed to the public, but Reston Now will bring you the details. There is a public celebration on the Reston Station plaza from 11:45 a.m. to 2 p.m.

Here is who will be there: