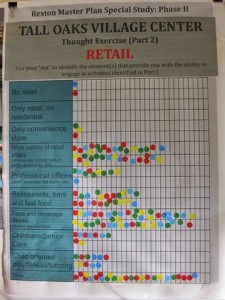 At the third of three community meetings on Phase II of the Reston Master Plan, the discussion focused on pedestrian connectivity, possible changes with the Baron Cameron retail, and more talk on what the future holds for the more-than-half-empty Tall Oaks Village Center.

Phase I of the Master Plan — which outlines development around Reston’s transit centers — took about four years to formulate but was approved by the Fairfax County Board of Supervisors earlier this year.

Phase II is on the fast track under a new system called Fairfax Forward. The process kicked off in June, has held three community meetings and hopes to have formal plan in 2015.

A new comprehensive plan is necessary, planners say, because Reston’s plan has not been updated in 25 years. Much has changed since then and there will be a lot more changes in population and development as Reston moves towards becoming a transit-oriented community.

Whatever changes are incorporated into the plan will not be a regulatory document and any structural changes will have to eventually go through the Reston Association’s Design Review Board, as well as county planning and zoning and the Board of Supervisors.

A September meeting discussed what, if any, rules should be in place should an entire cluster be considered for redevelopment (this would likely be apartment complexes and not solo-owned properties).

One theme ran through the October meeting — that it may be time to consider Tall Oaks a “convenience center” and redevelop the rest of the space, which has been without an anchor tenant for nearly four years.

Heidi Merkel, the county’s Reston Master Plan Phase II Project Manager, asked last week’s atendees to “think out of the box when it came to Tall Oaks.” Visitors were given stickers to “vote” for different concepts at Baron Cameron and Tall Oaks.

Among some of the most popular ideas for Tall Oaks: Wide Variety of Retail Shops; Grocery, Food and a Beverage Stores;  Other “Local Businesses; and Restaurants, Bars and Fast Food.

Those are actually “inside the box” ideas since that was what mainly was at Tall Oaks until stores closed at a fast clip over the last few years.

Other ideas: residential, mixed-use, a rec center, a boutique hotel, outdoor amphitheater or children’s play area, among others.

Reston resident Leni Nazare did have some creative suggestions, which the Reston Citizens Association recorded on its website:

I’d like to offer four food-related suggestions for Reston’s village centers. Each one is intended to draw people together – as is the intention of the village centers themselves.

1. Pop Up Food Truck Day. Have half a dozen food trucks with different cuisines park in one of our village centers, perhaps on a Saturday from 11:00 AM to 2:00 PM. And set up a big tent with lawn chairs and/or tables and chairs inside — so people can sit and linger while enjoying the food and company! Tall Oaks Village Center would be perfect for this because the parking lot is empty and the seniors at Tall Oaks Assisted Living could join the fun.

2.  Cooking school. The cooking school could be set up to serve not only the well heeled, but also the immigrants living in our community.  Our immigrants can teach the rest of us how to cook their native cuisines!  New York City already has such a program: https://www.leagueofkitchens.com/ .

To do this, we need a community cooking and teaching space. Perhaps we could start this program by using the space at the Reston Community Center, but in order to grow, we would need a larger more specially designed space.

3. Shared commercial kitchen, such as the one in DC:  http://unionkitchendc.com/.  The trend away from packaged junk food to healthier food is creating the opportunity for entrepreneurial ventures. The small businesses that are hatched in a commercial kitchen incubator can offer low-income people and others jobs close to home!

4. Independent restaurants. Eating out in Reston would be more fun if we had more independent restaurants that offer interesting food choices and special events, such as trivia nights, which bring people together. To encourage these restaurants to locate in Reston, let’s use the CSA concept.  Just like you pay your CSA (community supported agriculture) for 20 weeks of vegetables before the season starts, so too you could pay the restaurant for 20 meals before you ever dine there. This would reassure the restaurant that there is a market for what they offer. And it would create community because people from the neighborhood would be dining there over and over again and running into each other.