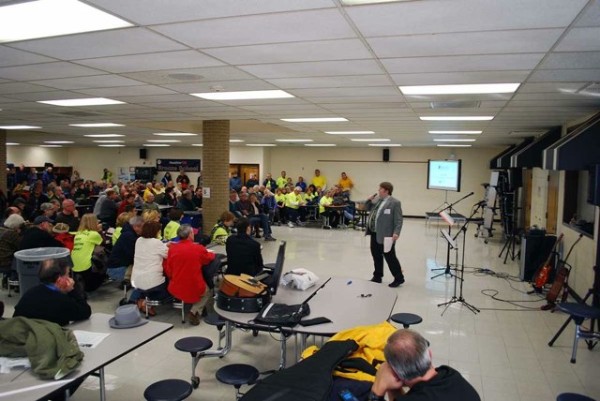 Rescue Reston was formed in 2012 in response to Reston National owner RN Golf’s inquiry as to the status of the golf course’s zoning. RN Golf, a subsidiary of Northwestern Mutual Insurance, believes it has the right to residential development there.

Fairfax County Zoning said in 2012 that the 166-acres is open/recreational space. After many postponements, RN Golf is finally getting a Board of Zoning Appeals hearing. That hearing will take place Jan. 21, and Rescue Reston wants as many citizens as possible to attend.

“The issue unites everyone,” he said. “Democratic or Republican, liberal or conservative. It doesn’t matter what your background is, but what your backyard is.”

The rally, which took place in the cafeteria of Langston Hughes Middle School, included a number of speakers presenting the reasons why the golf course needs to remain open space.

At the entrance to the cafeteria, Rescue Reston provided a variety of materials for the community — bright yellow T-shirts, flyers, yard signs, and a large land use map of Reston.

The presentation began with a recap of the situation so far by Rescue Reston President Connie Hartke.

Hartke talked about the upcoming hearing, presenting the parties on each side of the debate in a “Home Team vs. Away Team” chart. The mention of Lerner Enterprises, the development company speculated to be behind the push to rezone the golf course, elicited groans and boos from the assembled crowd.

Hartke encouraged everyone to come to the hearing on the Jan. 21, wearing the yellow shirts as a show of community involvement and support. Hartke says that the community needs to “leave a lasting impression, not only now but to any future landgrabbers.”

Members of the community in attendance also voiced their opposition to redevelopment of the golf course.

Sue Cordek, a 15-year resident of the RNGC area who works near the Reston Town Center, expressed concern that traffic would intensify if the golf course were to be developed.

“My commute is already over 20 minutes from home to work.” she said, “I think a traffic explosion would be inevitable.”

“The golf course is more than just a golf course,” said Marco Rando, a longtime Reston resident and South Lakes High School teacher. “It is a place for wildlife, a place for walking, open space. Overdensity in the area would be a problem that the roads can’t handle. We would also need another high school.”

The rally concluded with a confident message — that Restonians are capable of stopping corporate entities and “carpetbaggers” from taking over our community — as well as resounding chants of “Save open space!” and “Yes we can!”

The Board of Zoning Appeals hearing  will take place at 9 a.m. on Wednesday, Jan. 21, at the Fairfax County Government Center.