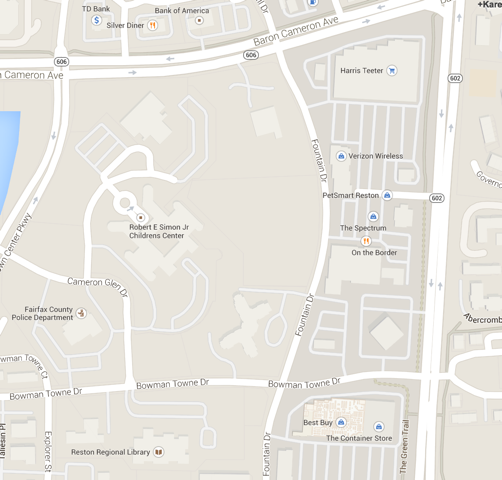 The Fairfax County Park Authority will hold a public hearing next month that will be the first step towards a land deal that could result in a large, new indoor recreation center in Reston.

The five-acre property is located on Fountain Drive, down the block from the new North County Government Center in the area known as the Reston Town Center North District. The parcel is bordered by Bowman Towne Drive, Town Center Parkway and Baron Cameron Avenue.

Park Authority Board Chair Bill Bouie said last month the park authority has committed to a deal, pending a public hearing and park authority board vote, that plans for a 90,000-square-foot recreation facility to be built there.

“The future rec center will be owned and operated by the park authority and will be available to all members of the Fairfax County community,” Bouie says.

That plan takes off the table the idea of a recreation center and indoor pool at Baron Cameron Park, a joint Reston Community Center/Fairfax County Park Authority deal that had been discussed for more than two years. While the RCC plan never reached the community referendum stage, there was mixed reaction from residents, many of whom felt that Small Tax District 5 (Reston) residents would be financially burdened.

The county says conveyance of the property, called Reston Towne Green by the park authority, is being considered in response to the Reston Comprehensive Plan Amendment. When the plan amendment was approved in February of 2014, it encouraged a land use pattern “that incorporates significant new residential development and new non-residential uses to complement the existing and planned public uses and the concentration of employment in the Reston Town Center and a significant new open space to serve as a defining element in the organization of a new, more urban pattern of blocks.”

The Park Authority is seeking public comment on the deal, which will include:

If you wish to speak at the hearing you may sign up in advance by calling the Public Information Office at 703-324-8662 or via email at [email protected]. You may also sign up at the hearing. Organizations may have one official speaker for five minutes; individuals may testify for three minutes.

The park authority board will vote on the matter at their regular board meeting scheduled later in the evening on April 8.