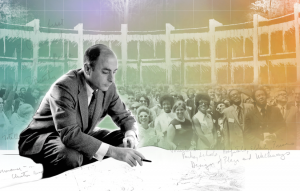 Just weeks after it screened at Reston Community Center and made its film festival debut at the Virginia Film Festival, the new Reston documentary can now be yours.

Another Way of Living: The Story of Reston, VA is available for purchase at the Reston Historic Trust and Museum at Lake Anne Plaza for $24.95.

Peabody Award-winning filmmaker Rebekah Wingert-Jabi, a Restonian, has been working on the documentary for more than four years. Wingert-Jabi and support staff shot more than 250 hours of footage and sifted through files of historical documents and photos at the Reston Museum to visually tell the story of Reston’s progress from a cow pasture purchased by New Yorker Bob Simon in 1961 to a pioneering “new town” — with some bumps along the way.

A rough cut of the 70-minute film was shown to a select audience in April 2014, during the celebration of Simon’s 100th birthday.

But since then, Metro’s Silver Line brought rail to Reston (in summer 2014) and Simon died in September 2015 at age 101. These significant events were included in the reworked version of the film.

“We wanted to flesh out key moments in Reston,” Wingert-Jabi said at last month’s screening of the film at RCC. “We wanted people to understand more of what happened in the years Simon wasn’t here (1967-92), about Mobil Land’s role in developing Reston Town Center.”

Read a recap of the film in this previous Reston Now article.

In addition to offering the movie, RHT has also just completed a new book focused on Reston’s past, present, and future. The book showcases images from the museum’s archives as well as text from exhibits to tell the story of Reston. That can be purchased at the museum for $18.95.