The under-construction residential property by Reston developer Chuck Veatch and Bozzuto has a name: The Aperture.

The Aperture is the project at Sunset Hills Road and Metro Center Drive, across the street from the Wiehle-Reston East Metro and Comstock’s Reston Station.

The Aperture will feature 421 apartments in a seven-story building, and has been approved for 10,000 square feet of ground-floor retail. The five-acre site was previously home to a mini-storage facility and retail strip center.

The site was also previously zoned industrial. Now that it is residential, residents will be Reston Association members. 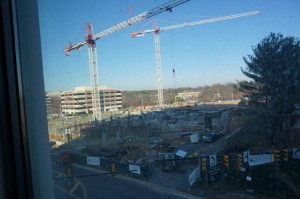 Planned amenities include a pool, pet play area, outdoor kitchen, fire pit, outdoor yoga space, and amphitheater, according to the Bozzuto website. The building will have 15,000 square feet of amenities, including an expansive resident clubroom.

Among the other amenities: a 24-hour concierge, a movie screening area, library/work space, three adjacent fitness spaces, underground parking and a Wi-fi lounge with computer games.