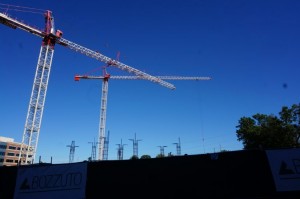 Correction, 4:30 p.m. Thursday: Janet Howell did not vote in favor of the bill. She did not vote.

The Virginia Senate passed a bill on Tuesday that could weaken developer proffers, which Fairfax County officials commonly use to get builders to contribute to park, roads and other improvements in exchange for development.

The bill passed the Senate 29-8. Reston’s Sen. Janet Howell (D) did not vote.

Limiting local government’s ability to ask for proffers could have a big impact in Reston, which is undergoing a period of multifamily housing growth as it turns towards being a transit-oriented community.

For instance, the Fairfax County Park Authority has said it will seek developer proffers to partially pay for a multimillion indoor recreation center, now slated for Reston Town Center North.

Developers of a proposed assisted and senior independent living facility at Hunters Woods have been asked to donate move than $100,000 to the Fairfax County Park Authority or Walker Nature Education Center, as well as install new traffic lights to help traffic flow near the entrance.

The county also has identified more than $2 billion in infrastructure improvements needed in Reston over the next several decades — money that would likely come from proffers, as well as taxes, bonds and even a new special tax district.

Features of the bill require that proffers be limited to offsetting impacts that are directly attributable to new residential developments, such as traffic. The Senate version of the legislation does not apply to high-density areas, commercial developments or neighborhoods near Metro stations.

The bill places restrictions on what local officials can ask for in development negotiations.

The Fairfax County Board of Supervisors this week asked Fairfax County General Assembly delegation members to oppose HB 770 and SB 549 or seek amendments to “shield Fairfax County from the significant restrictions these bills would place on development and proffers.”

Read more about the impact of the bills in this previous Reston Now story.